The self-healing fabrics could break down lethal toxins before they reach the skin.

Penn State scientists made a coating that allows conventional textiles used in everyday clothing to patch themselves up. Derived from squid ring teeth, the coating can turn virtually any fabric into a self-healing one. Simply adding water is enough to kick start the repairing process. 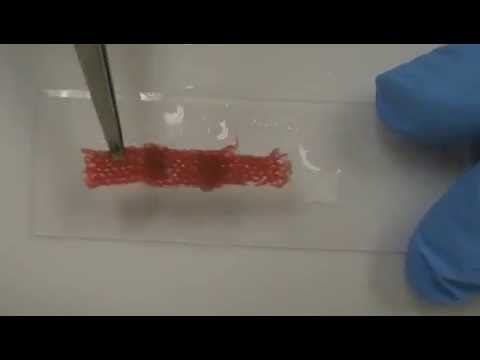 Nano research has already revealed the potential of self-cleaning clothes, and now a new study reveals the potential for similar technology in suits that can be used to protect soldiers from chemical or biological attacks.

“Fashion designers use natural fibers made of proteins like wool or silk that are expensive and they are not self-healing,” said Melik Demirel, professor of engineering science and mechanics at Penn State University and senior author of the study. “We were looking for a way to make fabrics self-healing using conventional textiles. So we came up with this coating technology.”

In order to create the unique self-healing textile, the team takes the material to be coated and immerses it in a series of liquids, creating layers of material that ultimately form the self-healing, polyelectrolyte coating. These coatings are composed of both positively and negatively charged polymers – in the case of the current study the polymers resemble those in squid teeth ring proteins.

When the coating needs to be healed, it can be placed in a safe solvent – such as water – under ambient conditions, where it will then repair itself. Essentially, you could repair torn jeans simply by throwing them in the washing machine.

Enzymes that protect against toxins can be integrated into the coating during the laying process and for this research the team decided to use urease. However, during commercial use, the type of enzyme would depend on the target chemical.

“If you need to use enzymes for biological or chemical effects, you can have an encapsulated enzyme with self-healing properties degrade the toxin before it reaches the skin,” Demirel said.

Self-healing film could coat garments and protect farmers from harmful chemicals such as organophosphates, which are used as herbicides and insecticides as well as nerve agents against soldiers. These chemicals can be lethal if enough are absorbed through the skin. A film that contains a specific enzyme that breaks down organophosphates would protect individuals from these toxic materials.