Scientists in Canada have made a remarkable discovery: they have unearthed the first fossils of a feathered dinosaur ever found in the Americas. 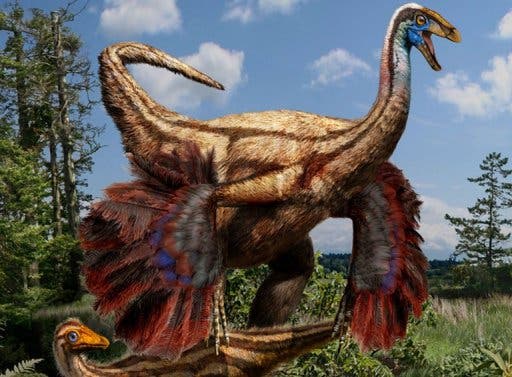 Their research, which was published in Science, includes 75 million year old specimens, including a juvenile and two adult ostrich-like creatures which go by the name of ornithomimids. Until now, the only such dinosaurs were found in Germany and China.

“This is a really exciting discovery, as it represents the first feathered dinosaur specimens found in the Western Hemisphere,” said Darla Zelenitsky, an assistant professor at the University of Calgary and lead author of the study. “These specimens are also the first to reveal that ornithomimids were covered in feathers, like several other groups of theropod dinosaurs,” Zelenitsky said.

In today’s birds, feathers are developed shortly after hatching – but for Ornithomimus edmontonicus the situation is quite different. Feathers are only found on the bodies of the adults – which led to the logical conclusion that the feathers had decorative purposes and were used for attracting mates. Most likely, feathers appeared only when the specimen was old enough to mate, also being a simple of fertility.

Flight was not an option for them; they were too big for flying or even gliding. Researchers believe that as dinosaurs evolved, feathers evolved to serve other purposes, such as warming and making flight possible.