by Alexandru Micu
in News, Science, Tech, Videos
A A

Caltech engineers have developed an ultra-thin, lens-less camera design which can do everything a traditional camera can while still fitting in your pocket.

Traditional cameras can be designed to be pretty small — such as the ones in your webcam or telephone — but because of the way they’re designed, they can’t ever really be completely flat. These devices rely on arrays of lenses to bend and direct incoming light onto a film or optical sensor where it’s recorded, and the lenses have to be a certain size, shape, and distance away from their neighbors to work properly — so they need to be 3D.

This is a problem if you’re trying to design a high-fidelity camera that fits in your pocket. So a team of engineers at Caltech have worked around the issue by doing away with the lens altogether and replacing them with an ultra-thin optical phased array (OPA).

Light bending is so last year

OPA’s do the same job as a lens but instead of using glass to bend light, they use processors to crunch data. They’re large arrays of light sensors, each of which can digitally factor in a precise time delay (called phase shift) to incoming light, allowing the camera to focus on different objects or look in different directions.

The OPA works like a reverse phased array. These are large emitter arrays, mostly used in wireless communication and radar, and work by sending out the same signal through each emitter. Because of their position relative to one another, these emitters will work to amplify the signal in one direction and cancel each other out everywhere else, essentially creating a signal ‘laser beam’. The OPA works with incoming signal (light), amplifying it in one direction while canceling out signals received by all elements across the array.

“What the camera does is similar to looking through a thin straw and scanning it across the field of view. We can form an image at an incredibly fast speed by manipulating the light instead of moving a mechanical object,” says graduate student Reza Fatemi, lead author of the paper.

“Here, like most other things in life, timing is everything. With our new system, you can selectively look in a desired direction and at a very small part of the picture in front of you at any given time, by controlling the timing with femto-second—quadrillionth of a second—precision,” says principal investigator and Bren Professor of Electrical Engineering and Medical Engineering in the Division of Engineering and Applied Science at Caltech Ali Hajimiri.

The camera currently uses an array of just 64 light receivers (in an 8×8 grid), so the resulting image has a pretty low resolution. But it’s only intended as a proof of concept — and it works — meaning that it’s just an issue of scaling it up. The layer-thin camera primarily uses silicon photonics to emulate the lens and sensor of a digital camera, so it should be cheaper as well as thinner than its digital counterparts. 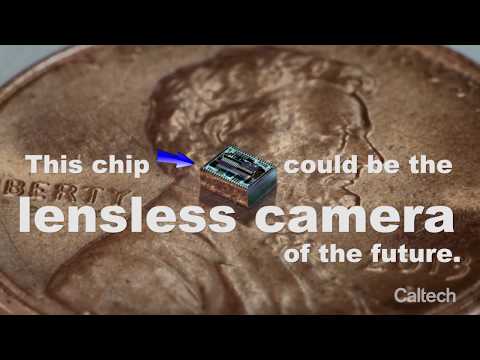 Photographers will be happy to hear that Caltech’s layer-camera can emulate anything a regular lens is capable of doing only much faster — for example, Hajimiri says it can switch from a fish-eye to a telephoto lens instantaneously, just by tweaking the incoming light. Smartphone enthusiasts everywhere will be delighted that such cameras will allow devices to become thinner than ever before.

Moving from the very small to the very big, the 2D-camera could allow for massive, but very light and flat telescopes to be built on the ground or in space, allowing for a far better control than lensed telescopes today and dramatically reducing their maintenance and running costs. Finally, the tech could change how we think about cameras from the ground up, by allowing whole new classes of paper-thin, inexpensive devices such as wallpaper-cameras, even wearable ones.

The team doesn’t have plans to work on scaling up the camera by designing chips that enable much larger receivers with higher resolution and sensitivity.

The paper was presented at the Optical Society of America’s (OSA) Conference on Lasers and Electro-Optics (CLEO) and published online by the OSA in the OSA Technical Digest in March 2017.

The paper “An 8X8 Heterodyne Lens-less OPA Camera” has been presented at the Optical Society of America’s (OSA) Conference on Lasers and Electro-Optics (CLEO) and can be read here.