To our eyes, life underwater looks a bit blander and less crisp than at the surface. But that’s only because our vision had to adapt to surface life, favored by millions of years of evolution. If you were a marine creature, you’d literally see things with a different eye. One such creature is the mantis shrimp, whose vision was modeled in a new camera by researchers at the University of Illinois.

The world through the eyes of a mantis shrimp

The new bio-inspired camera that mimics the eyes of the mantis shrimp can detect the polarization properties of underwater light. By being able to read how light refracts (or bends) when it passes through the surface of water and bounces from particles and water molecules, the researchers were able to use devise a novel GPS method.

“We collected underwater polarization data from all over the world in our work with marine biologists and noticed that the polarization patterns of the water were constantly changing,” said study leader Viktor Gruev, an Illinois professor of electrical and computer engineering and a professor of the Carle Illinois College of Medicine.

“This was in stark contrast to what biologists thought about underwater polarization information. They thought the patterns were a result of a camera malfunction, but we were pretty sure of our technology, so I knew this phenomenon warranted further investigation.”

Just earlier today, we wrote about another study that showed how the ancient Vikings could have used sunstones that polarize light as a compass. In a separate study published today in the journal Science Advances, Gruev and colleagues similarly discovered that the underwater polarization patterns captured by the shrimp-like camera are linked to the sun’s position relative to the location where the recording was made.

The team used this information to estimate the sun’s heading and elevation angle, allowing them to determine their GPS coordinates simply by knowing the date and time of the filming. During tests that coupled the bio-inspired camera with an electronic compass and tilt sensor, the researchers were able to locate their position anywhere on the planet within an accuracy of 61 km. That’s not exactly Google Maps material, but still impressive for a light-based, underwater GPS. 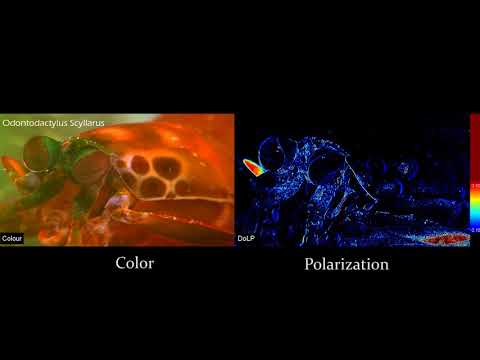 This method could prove highly useful in various underwater applications such as locating missing aircraft or creating a detailed map of the seafloor by using a swarm of tiny robots.

The research also offers valuable insights into the migratory behavior of many marine species.

“Animals like turtles and eels, for example, probably use a slew of sensors to navigate their annual migration routes that take them thousands of miles across oceans,” Gruev said. “Those sensors may include a combination of magnetic, olfactory and possibly – as our research suggests – visual cues based on polarization information.”

If polarization is this important for many marine species, how does pollution interfere with all of this? According to the researchers, it’s very likely that marine pollution, which has increased dramatically in the past few decades, affects underwater polarization patterns. This means that many marine animals might sense their surroundings differently from what they had originally learned. For instance, already many more whales are becoming stranded, some even ending up close to the Californian shore, where they’ve never been observed before.