by Mihai Andrei
in Inventions, Physics

It’s the world of science fiction come alive – Swiss researchers have developed contact lenses which, when paired with special spectacles, bestow telescopic vision on their wearers. 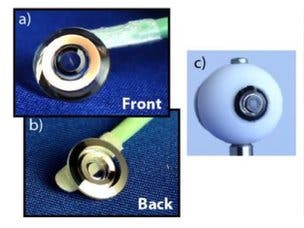 The contact-lens-and-spectacles have the ability of zooming in 2.8 times.

The device was not created for Bond-like purposes, but rather to help people suffering age-related visual impairment and blindness. Age-related macular degeneration (AMD) is a medical condition which usually affects older adults and results in a loss of vision in the center of the visual field because of damage to the retina. It is a very serious condition which dramatically hinders day to day activities, such as driving or even cooking.

However, the lenses might someday find their way towards other areas as the research was being funded by DARPA, the department of the US military responsible for research.

“They are not so concerned about macular degeneration,” he said. “They are concerned with super vision which is a much harder problem. That’s because the standard is much higher if you are trying to improve vision rather than helping someone whose eyesight has deteriorated,” he said.

The device consists of two parts: the central region lets light through for normal vision, and the telescopic part sits in a ring around this central area. Tiny aluminium mirrors scored with a specific pattern act as a magnifier, bouncing the light around four times within the ring before directing it towards the retina.

The magnifying is not in use, being blocked by polarising filters, but users can switch it on by changing the filters on the spectacles so the only light falling on their retina comes from the magnified stream. The prototype is no larger than 8mm in diameter, 1mm thick at its centre and 1.17mm thick in its magnifying ring.

“The most difficult part of the project was making the lens breathable,” Dr Tremblay explained. “If you want to wear the lens for more than 30 minutes you need to make it breathable.”

This is very important because gases have to be able to pass through the lens to the eye – especially the cornea, which requires oxygen supply to function. However, this makes the fabrication proces much more difficult.

“The fabrication tolerances are quite challenging because everything has to be so precise,” he said.