This frog hears through its mouth

by Tibi Puiu
in Anatomy, Biology
Reading Time: 2 mins read
A A
Share on FacebookShare on TwitterSubmit to Reddit

One of the smallest amphibians in the world, the  Gardiner’s Seychelles frog, is also one of the most eccentric. The frog doesn’t stand out through an over-glamorous coloring or some unique, wild mating call, but rather as a result of one of its weird biological features. This frog doesn’t have ears – yet it can hear. How? By receiving sound waves through its mouth. 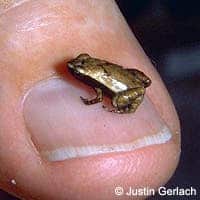 All frogs actually hear in a different way from all the other animals, in the sense they don’t have  an external cartilaginous sounding board – instead frogs have eardrums placed directly under the skin. But Seychelles frogs don’t even have this. Can it hear in the first place? Well, a team of researchers from a variety of French universities tested the Seychelles hearing range. They placed a frog in a room where they played recorded calls from other frogs through a speaker. The frog responded to these calls, signifying it could hear them.

The mystery deepened even further after the scientists had the frogs X-rayed and saw that their bones didn’t conduct sound, like human jawbones do for instance. So scientists made a wild guess: what if the frog could hear through its mouth by directing sound to its inner ear – a cavity within the frog’s skull that hosts reverberated noises?They performed a simulation  and, indeed, it showed that the frog was indeed capable of hearing through this method. This doesn’t mean it hears in this manner though – it just demonstrates that it could.

The Seychelles frog can only be found on a few islands in the Seychelles, off the coast of Madagascar. Scientists suspect that due to its isolation, the species’ hearing has evolved very little. Advanced hearing, characterized by the evolution of eardrums, dates back from the time of  the separation of Gondwana, an ancient supercontinent. Studying Sechelles frogs, researchers hope not only to unravel how this peculiar animal performs basic biological functions, but also how Gondwana animals might had looked and behaved like.