Scientists have stumbled upon a new species of flying frog – on the ground. 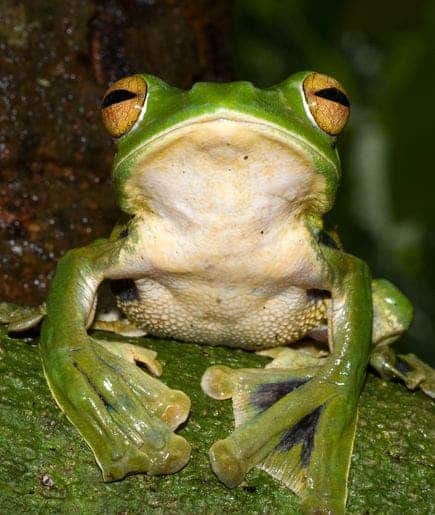 While hiking in 2009, not far from Ho Chi Minh City, the capital of Vietnam, “we came across a huge green frog, sitting on a log,” said Jodi Rowley, an amphibian biologist at the Australian Museum in Sydney. Upon further inspection, she found that the 9 cm long creature is part of a relatively large group of flying frogs known for their ability to parachute from remarkable heights using special aerodynamic adaptations, such as webbed feet.

To add a little touch to the story, she named the frog “Helen’s frog”, as a tribute to her mother, “who has steadfastly supported her only child trekking through the forests of Southeast Asia in search of frogs“. Among the relatively large family of flying frogs, Helen’s frog is one of the most… flying: it’s got huge hands and feet that are webbed all the way to the toepad.

“Females even have flappy skin on their forearms to glide,” added Rowley, who has received funding from the National Geographic Committee on Research and Exploration. (National Geographic News is part of the National Geographic Society.) “The females are larger and heavier than males, so the little extra flaps probably don’t make much of a difference,” she said “At first it may seem strange that such a fantastic and obvious frog could escape discovery until now—less than 100 kilometers [60 miles] from an urban centre with over nine million people.”, Rowley wrote on her blog.

Even so, this kind of frog is a master of escaping attention – be it from its prey or its predators. However, one thing it probably won’t be able to escape is Ho Chi Minh expanding – the expanding city will probably wipe out several habitats, as other examples have showed us oh so well. This kind of lowland forest is among the most threatened, mostly because they’re so accessible to humans, which destroy them for logging, agriculture and city expansion.

“While Helen’s flying frog has only just been discovered by biologists,” Rowley wrote, “unfortunately this species, like many others, is under great threat from ongoing habitat loss and degradation.”