For the first time, researchers have discovered a vertebrate able to change the texture of its skin from smooth to spiny. The new frog species was found in Ecuador in the plentiful moss surrounding the native forest.

For the first time, researchers have discovered a vertebrate able to change the texture of its skin from smooth to spiny. The new frog species was found in Ecuador in the plentiful moss surrounding the native forest. 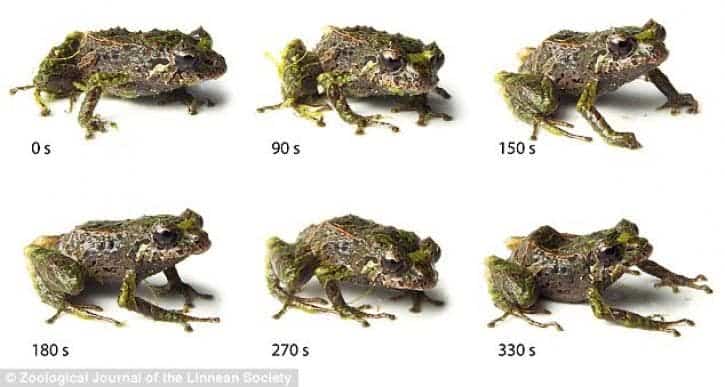 When researcher Katherine Krynak and her husband Tim spotted what seemed to be a new species of frog, they put it in a cup to study it the next morning. But when they returned, they observed something unexpected: the frog turned all punk, changing its skin from smooth to spiky. But it got even stranger: as they placed it on a napkin to take some photos, the skin smoothened up again.

“I then put the frog back in the cup and added some moss,” says Katherine, a PhD student at Case Western Reserve University in Ohio. “The spines came back… we simply couldn’t believe our eyes, our frog changed skin texture! I put the frog back on the smooth white background [and] its skin became smooth.”

According to their research, which was published in The Zoological Journal of the Linnean Society, the scientists discovered that a related species of frog could change its skin in a similar manner, raising further questions about how this trait evolved.

“Either these two different species from two different clades evolved the same trait, or all species had it and then lost the trait, or other species in this clade do this, too, and it’s just never been documented,” Dr. Krynak said.

There are obvious advantages to this – camouflage and avoiding predators. But while the camouflage part works really fine, it remains to be seen if this behavior actually scares off predators.

“The spines and coloration help them blend into mossy habitats, making it hard for us to see them,” said Katherine in a press releasefrom Case Western University. “But whether the texture really helps them elude predators still needs to be tested.” It’s also not clear how exactly mutabilis changes its skin texture.

Researchers will now work to determine how this happens.