Moles smell in stereo to navigate for food

by Tibi Puiu
in Animals, Biology
Reading Time: 5 mins read
A A
Share on FacebookShare on TwitterSubmit to Reddit

Stereo sensing is a highly important skill that most animals possess that creates a directional perspective. Not all senses are stereo, however, in some animals. For instance, humans have stereo vision and hearing, however no stereo smell – the latter being a trait that not too many animals possess. The common mole has been found to display such an ability, after researchers at Vanderbilt University found the mammal relies on stereo smell to locate prey.

Few animals have so far been proven to have stereo smell, like some species of ants and sharks, although some that heavily rely on their sense of smell like pigs, mice or dogs might also possess this skill. The common mole (Scalopus aquaticus), which can be found wrecking havoc through backyard gardens anywhere from eastern United States and Canada to Mexico, is now the first mammal proven to smell in stereo.

“I came at this as a skeptic,” neuroscientist Kenneth Catania of Vanderbilt University was quoted as saying in a press release. “I thought the moles’ nostrils were too close together to effectively detect odor gradients. The fact that moles use stereo odor cues to locate food suggests other mammals that rely heavily on their sense of smell, like dogs and pigs, might also have this ability.”

The human auditory system is able to discriminate whether a sound comes from the right or from the left, if it is located behind, in front of, below or above the hearer. As a matter of fact, humans can distinguish sounds from two different sources, where the angle between the sources is only 3° – that’s very accurate. Similarly, with stereo smell one can detect different odor sources from each sources, with the brain being also wired to detect these differences. A sense of depth and orientation all based on smell is thus possible – for the common mole, at least.

Catania’s inspiration to study the common mole can be tracked back as far as ten years ago when he studied another mole, the star-nosed mole which uses a sort of tentacle-like tissue on its nose to sense food by touch.  He decided to test the common moles’ capability to find prey for comparison purposes.

“I expected the common mole, which is virtually blind and doesn’t have a very good sense of touch, to be a lot worse than the star-nosed mole. So I was quite surprised when they turned out to be very good at locating prey. At the time, I figured that they must be using their sense of smell, but I didn’t pursue the matter.”

Since the two performed the same at finding food, despite sensing discrepancies between the two species, Catania naturally reasoned that the common mole’s sense of smell must be more sophisticated that previously thought. Catania presumed the mole must have stereo smell in order to guide itself and find mole, considering all its other senses didn’t provide navigation, so he put his idea to the test.

Where’s that smell coming from? 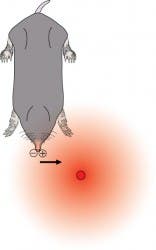 He made a radial arena with food wells spaced around a 180-degree circle with the entrance for the mole located at the center. Multiple tests were carried out with food (earthworms) placed randomly at different locations, while the arena was sealed at all time in order for Catania to see every time the mole sniffed by measuring the difference in air pressure. When the mole was introduced, Catania observed how the mammal first sniffed a bit back and forth around its location then immediately zeroed in on its target, the food source, on a direct path.

“It was amazing,” he said. ”They found the food in less than five seconds and went to the right food well almost every time. They have a hyper-sensitive sense of smell.”

To see whether indeed stereo smell aided navigation, Catania blocked each of mole’s two nostrils at a time and repeated the test. When the left nostril was blocked, the mole would still be able to locate food, but its path towards it was veered to left. The same, only opposite, happened when the right nostril was blocked.

“This is strikingly similar to a landmark study of hearing in barn owls performed in 1979 byEric Knudsen and Mark Konishi at the California Institute of Technology, who found that blocking one of the owl’s ears caused them to misjudge the location of a sound source,” Catania said.

In the ultimate test that finally proved moles indeed posses stereo smell Catania reversed the mole’s nostrils  after he inserted plastic tubes in both nostrils that were reversed. Thus, the right nostril was sniffing air on the animal’s left and the left nostril was sniffing air on the animal’s right. When their nostrils were crossed in this fashion, the animals searched back and forth and frequently could not find the food at all.

Findings were published in the journal Nature Communications. [source]

ZME readers, is the mole cool or what? Discuss in the comments section below.