Music for the nose: an olfactory organ

A"smell organ" shoots scents instead of musical notes to dazzle an audience.

There’s a whole science behind scents. The perfume industry is worth billions and scientists all over the world, mostly in corporate laboratories, work each day to find the perfect balance between odors. In many respects, perfumery is regarded as an art of its own, and some have even drawn comparisons to music.

Dr. Septimus Piesse, a French chemist and perfumer who wrote the 1857 book The Art of Perfumery, was famous in his time for his theories that loosely compared music and how certain smells work together.

Just like an arrangement of musical notes fly together to create a spectacle for the ears, so can an array of various scents blend to enlighten the nose. Oppositely, when music goes wrong and leads to dissonance, so can some smells go horribly wrong together.

With this in mind, a 1922 issue of the magazine  Science and Invention presented a concept instrument meant for the nose, not for the ears. 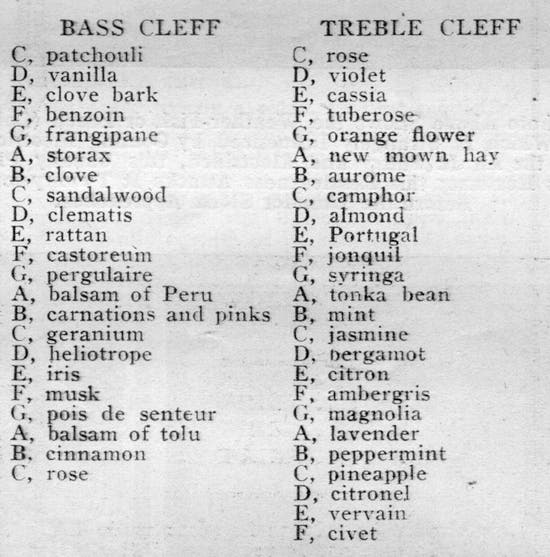 “Of course, the combination of these odors will create a smell entirely different from any of the individual qualities of the various perfumes and it is necessary that, in the soft, dreamy compositions, the odors blend harmoniously. Discords will have a decidedly unpleasant effect but inasmuch as the composers did not dwell upon discords to any great extent, the audience will be saved the rather unusual embarrassment of smelling disagreeable combination. Some music, would perhaps have to be changed and the odors carefully graduated so that in the smells wafted over the audience no particular perfume will predominate, except when the loud pedal, or rather, in these smell organs, the strong odor pedal is trod upon.”

“It is, therefore, up to the perfumer to combine the mixtures in much the same way as an artist blends colors, or as a good florist makes up his bouquet. If it is desirable to insert a little contrast into the bouquet, the appropriate blossoms or grasses are used, and so the perfumer, likewise would have to employ the proper aromas.”

If you think a bit about it, it sounds like a brilliant idea. Imagine being in the front row of the concert hall where the olfactory organ concert is swinging away. It wouldn’t be too exciting, but if joined with images or music, preferably both, uplifting sensations might touch you.

A concert could explore the four seasons with all the odors that come with each or the story of a journey at sea told through smell. Avant-garde artists would surely throw the most peculiar odor side-shows.

Would such an instrument be possible? Well, unlike musical notes which are actually vibrations, smell doesn’t dissipate nearly as quickly. The range of emotions that one can touch over a period of time is thus very limited in the case of a smelling organ. Maybe by using an intelligent, localized venting system that can’t be felt by the audience would make such a feat possible.