by Mihai Andrei
in Alien life, Biology
Reading Time: 2 mins read
A A
Share on FacebookShare on TwitterSubmit to Reddit

After two decades of drilling in the frozen wastelands of Antarctica, Russian researchers have finally managed to drill down to lake Vostok, which has been sealed under kilometers of ice for over 15 million years. 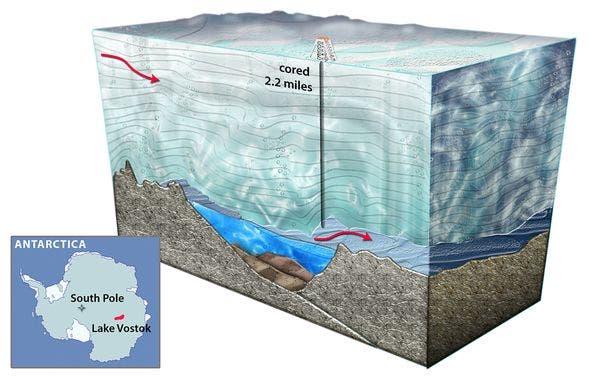 When they first announced they reached the water, biologists were ecstatic; not only did they get a unique chance to fill in some evolutionary gaps, but they also have access to organisms which have evolved differently then other ones from our planet. But they weren’t the only ones to be thrilled – this could also offer extremely valuable information about the chances of finding life in the most unlikely of places, such as the ice-crusted moons of Jupiter and Saturn.

Now, researchers don’t expect any ‘alien life’ in lake Vostok, but any living creatures found there are definitely on a slightly different evolutionary path in the millions of years that have passed.

“If they find evidence of life there — and I do think Lake Vostok has life in it — it’s going to be Earth-like,” astrobiologist Dale Andersen, with the SETI Institute’s Carl Sagan Center for the Study of Life in the Universe, told Discovery News. “It’s going to be the same kind of life you find everywhere else. It may be that life has evolved differently, but it’s still Earth-like, still based on the same DNA structure,” Andersen said. “The real value is that it helps us learn how to explore these kinds of environments better. It opens up your imagination for how to explore these kinds of environments, whether it’s on Earth or Europa,” he said.

Biologists are optimistic regarding life in Vostok lake, despite the fact that the water is supersaturated with oxygen and other gases.

“The ice above the lake is known to contain low levels of viable but dormant organisms frozen into the ice. As this ice melts into Lake Vostok, it will carry these microorganisms so Lake Vostok is not likely to be sterile,” he said.

While lake Vostok will offer insight into how life spreads and finds suitable environments in such extreme conditions, its secrets are safe for at least another year. Russia won’t be able to retrieve its water sample until the next Antarctic summer.