by Mihai Andrei
in Alien life, Biology, Geology
Reading Time: 3 mins read
A A
Share on FacebookShare on TwitterSubmit to Reddit

A historic expedition that took over 10 years of planning and 3 years of preparation, a national effort from both researchers and students, finally concluded today. The team from Montana State University managed to drill into a lake that has been frozen for hundreds of thousands of years. 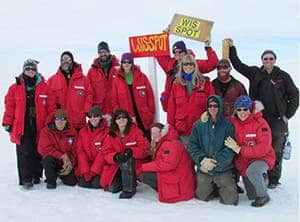 After hauling equipment hundreds of miles across the Antarctic ice in dramatic weather conditions, the team melted holes through half a mile of ice and reached Lake Whillans at 5 a.m. Jan. 28. Researchers involved in the Whillans Ice Stream Subglacial Access Research Drilling project (WISSARD) collected water and sediment from the lake, in an attempt to find out more about life’s final frontiers on Earth.

“We’re very proud of this accomplishment, which is due to a huge effort by many people and organizations,” WISSARD Science Project Manager Robert Edwards of MSU wrote in an email from McMurdo Station in Antarctica.

It was the first time that clean whole samples have been extracted from a subglacial lake in Antarctica – so far, the only lake investigated this way was Vostok this year, but the samples haven’t been yet fully analyzed.

“The analysis of these samples and data, together with the results from a planned field season next year at nearby sites, will allow WISSARD scientists to directly address many key questions regarding the nature of the subglacial aquatic environment under the Whillans Ice Plain, on the margin of the West Antarctic Ice Sheet,” Roberts said.

John Priscu – long-time polar scientist and professor in MSU’s Department of Land Resources and Environmental Sciences in the College of Agriculture – is chief scientist and one of three directors of the WISSARD project; their work is truly groundbreaking in that it will answer some puzzling questions about life on Earth, and in outer space. How so?

Well the lake has been sealed by ice for a period of over 100.000 years. It’s a long enough period for species to evolve; don’t expect alien fish or something like this, but if bacteria has survived until now, then the odds are they are different species by now. Exobiologists are also interested by this study because it will show if organisms can survive even in these extremely cold situations. If this is true, and they can survive in subglacial water, then why couldn’t they survive on similar conditions in other areas of the solar systems, like say, Europa?

Researchers hope not only to take surface samples, but also explore the lake with a remotely operated submersible and take samples of sediment from the lake bottom. Their research will not only provide information about any bacterial life existing, but also information about past climate, water flow and ice movement.