by Tibi Puiu
in Environment, Geology, Research, Science
Reading Time: 2 mins read
A A
Share on FacebookShare on TwitterSubmit to Reddit

It took 30 years, an enormous amount of effort and patience, and drilling through 3,768 meters of thick ice for scientists to finally reach the surface of the Vostok, a unique subglacial lake. Just as large as the great Ontario lake, the Vostok is thought to be 20 million years old, and due to the fact that it’s been completely isolated from the outside world, researchers believe the lake might provide invaluable information on what to expect from an alien world. Who here senses a bit of “The Thing“-induced paranoia? 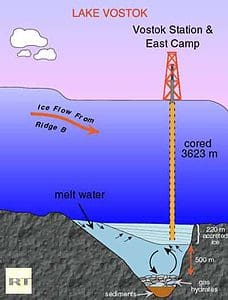 Hailed as one of the greatest geographical discoveries of modern times, the Vostok lake is considered to be a completely unique formation. Drilling first began around the Vostok Station in the Antarctic in the 1970s, but curiously enough, it was only in 1996 that Russian and British scientists discovered with sonar and satellite imaging what later proved to be one of the world’s largest freshwater reservoirs. Well, it’s not like they could’ve missed it, since it’s the size of Ontario lake.

In 1998, just 130 meters away from the lake’s surface, drilling had to be stopped. You can’t just go through with your more or less typical oil rig drill through such a delicate, and completely unknown environment. Contamination is bound to happen, and it’s enough for just a few traces of bacteria to interact with the lake to ruin everything, although few survive at Arctic temperatures. More relevant, subtle technology was needed and it eventually came in 2003, after it was developed at St. Petersburg. Work resumed in 2005 after tests.

What the scientists are especially interested in are signs of life. If lake Vostok truly is a closed system, completely isolated from the outside world, and life is found, then it will certainly provide some great insights into our planet’s past. On the contrary, if the lake is completely and utterly dead, than it will aid scientists understand how to search for extra-terrestrial life on future space trips.

Lake Vostok is believed to house the cleanest water on the planet – twice cleaner than double-distilled water.