by Tibi Puiu
in Astronomy, Science, Space
A A 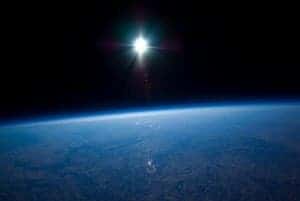 Commercial space flight is starting to promise to become a very lucrative market since an ever growing interested is harnessed by the big corporations of the world. Richard Branson’s Virgin Galactic in cooperation with Scaled Composites (Mojave, CA), announced their sincere intentions of entering the commercial space travel market, after recently the giant Boeing also announced its plans to carry civilians in space.

Apparently, the aerospace manufacturer has reached an agreement with Space Adventures for the marketing and manufacturing of low-orbit space travel, which could see wealthy, yet ordinary civilians travel into space, as well as guarantee regular transportation for the International Space Station or other sub orbital projects, aboard the Boeing Crew Space Transportation-100 (CST-100).

The CST-100 could carry seven people and fly in low-Earth orbit as soon as 2015, Boeing said. The potential customers for excess seating capacity include private individuals, companies, non-governmental organizations, and U.S. federal agencies other than NASA.

“By combining our talents, we can better offer safe, affordable transportation to commercial spaceflight customers,” explained Brewster Shaw, vice president and general manager of Boeing’s Space Exploration division. “To date, all commercial flights for private spaceflight participants to the ISS have been contracted by Space Adventures. If NASA and the international partners continue to accommodate commercial spaceflight participants on ISS, this agreement will be in concert with the NASA administrator’s stated intent to promote space commerce in low Earth orbit.”

This could prove to be the first real step in providing the possibility for commercial space travel, even though in the beginning (first 10-20 years) this will solely be a player’s market, with fare tickets ranging in the the tens of millions. The first space tourist was Dennis A. Tito, a California multimillionaire, who shelved $20 million for a ride and spent eight days in the International Space Station with two cosmonauts in 2001. Guy Laliberte, founder of Canada’s Cirque du Soleil, paid more than $35 million to travel into space last year on a Russian spaceship from Kazakhstan.

“We are excited about the potential to offer flights on Boeing’s spacecraft,” emphasized Eric Anderson, co-founder and chairman of Space Adventures. “With our customer experience and Boeing’s heritage in human spaceflight, our goal is not only to benefit the individuals who fly to space, but also to help make the resources of space available to the commercial sector by bringing the value from space back to Earth.”

What’s interesting is that Boeing’s new jump into the commercial space flight market comes a few months after President Obama‘s decision to retire the Space Shuttle program and shelve lunar missions for the next couple of years, until N.A.S.A. will get completely restructured. Until then N.A.S.A. will be completely dependent on commercial space taxis for ISS cargo transpiration and on the Russian Soyuz spacecraft for astronaut missions. The Russian space agency charges the US $51 million per seat for a ride on a Soyuz, a price tag that is said to reach $56 million by 2013.

UPDATE: Three years since this post was published, a lot has changed in the private space sector. For one, SpaceX, currently the most successful private aerospace enterprise has successfully deployed its own spacecraft to the International Space Station, and the aforementioned Dennis Tito is actually planning one of the most dashing plans yet – a manned mission to mars by 2018.  The space shuttle is long dead and gone, alas.