The first witnessed birth of a black hole

by Mihai Andrei
in Astronomy, Research, Space
Reading Time: 2 mins read
A A
Share on FacebookShare on TwitterSubmit to Reddit 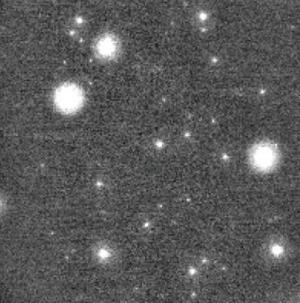 The date of March 19, 2008 will be remembered as a very important day in astronomy and science; it’s the day mankind had its first chance of witnessing the birth of a black hole. It all started when the “Pi of the Sky” telescope detected the brightest ever optical outburst from a distant place, about 7.5 billion light years from the Earth, halfway across the visible Universe. What’s also interesting is that the telescope is just 71 mm in diameter. Some materials were published in the Soltan Institute for Nuclear Studies. The outburst named GRB 080319B is believed to be the death of a massive star leading to the creation of a black hole. For the first time the birth of a black hole has been filmed; cameras recorded about a 4-minute sequence of 10-second-long images. The outburst was so powerful that in 20 seconds it became visible with the naked eye ! Quite something when you think how far away it is. But after that it began fading and after 4 minutes it was about 100 times fader. This observation was the proof of the novel concept of the “Pi of the Sky” project, as its principle is quite different and innovative. It was inspired by Bohdan Paczynski, the great astrophysicist who past away last year. The novelty consists of the fact that it monitors a continuously large fraction of the sky taking 10s exposures and detects optical flashes independently, while the satellite information confirms the origin of the flash. While this observation was astonishing itsefl, astronomers expect even more great recordings, perhaps even better than this one. The name, “Pi in the sky” comes from the fact that they initially wanted to cover pi (~3.14) steradians of the sky. Here’s the video!