Teen drinking linked to Internet use

by Tibi Puiu
in Research, Studies
A A 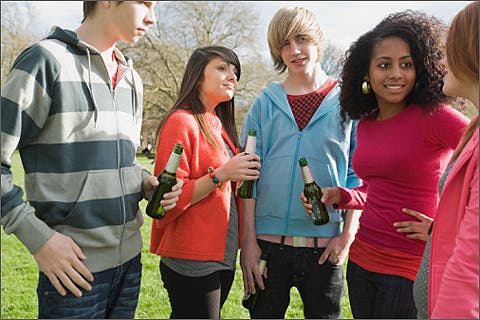 According to a recently published study, teens who regularly drink alcohol tend to spend more time on a computer surfing the internet on social networking sites, than other teens who don’t drink alcohol.

As a conclusion that both somewhat bashes ‘nowadays teens’ and the Internet, the study concludes that a link between teenage drinking and Internet exists. Though it isn’t a direct cause-effect conclusion, it’s still an association, one which scientists explain by the number of alcohol refereces are portraied all over social media websites like facebook or twitter, as well as online adverts promoting alcohol use. It’s important that parents realize their children face enticements online that may encourage underage drinking, the researchers say.

More research over longer periods of time is needed to better understand the relationship between computer and alcohol use, the researchers of the study, which was published in the journal Addictive Behaviors, say.

“Children are being exposed to computers and the Internet at younger ages,” said study researcher Jennifer Epstein, a public health researcher at Weill Cornell Medical College in New York. “For this reason it’s important that parents are actively involved in monitoring their children’s computer usage, as well as alcohol use.”

Remarkably, researchers couldn’t find any link between playing online video games or shopping online and drinking. Guess, that’s because kids like to stay sober while playing WoW and unpack a brewsky from time to time while surfing facebook.

Considering that around 2 billion people use the Internet, of which most probably over 500 million are teens, I’m confident one could find all sort of links between surfing the web and other activities. What’s next, “researchers find hidden link between internet use and teen sex”. Twenty years ago, it used to be TV.

The study adds to a growing body of research that has found both pros and cons to teen Internet use. Related to this particular study, a recent report from the American Academy of Pediatrics which I reported a bit about some time a go, described a new phenomenon known as “Facebook depression,” in which children and teenagers spend too much time on social networking sites, then develop symptoms of depression. And other studies have linked Internet use in general to an increased risk of depression and loneliness among teens.

Researchers agree, however, that Internet use is indeed important and helpful for a teenager. In addition to helping with homework, studies have found online activities help teens maintain ties with friends. I have an idea teenagers are using the internet for much more than researchers are lead to believe. Oh, and one study found those who did not spend time online were also at an increased risk for depression. Again, the key is balance.

“The Internet offers a wealth of information and opportunities for intellectual and social enrichment,” Gil Botvin, a professor of public health at Weill Cornell Medical College, said in a statement. “However, it is becoming clear that there may also be a downside to Internet use.”

More research is needed to understand these potential dangers and combat them, he added. According to the Substance Abuse and Mental Health Services Administration’s (SAMHSA’s) National Survey on Drug Use and Health, some 24 million children aged 12-18 need treatment for alcoholic addiction, but only 2.6 million receive help alcohol recovery centers.