Robot swarms hint towards the future 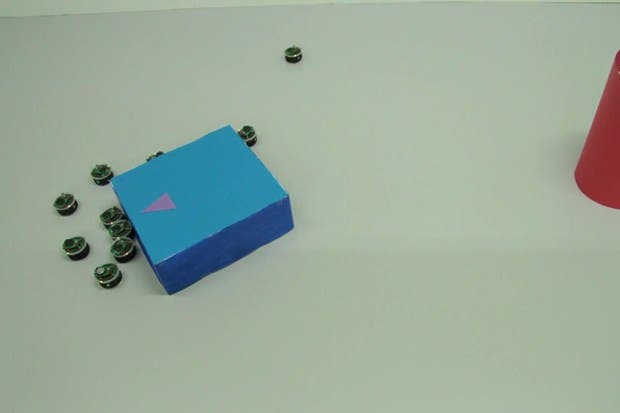 When you think of robots, the first thing you might think of are anthropological-looking tin cans that beep around and perform various tasks (you have SciFi shows to thank for that) or familiar modern day industrial robots that toil away day and night producing goods. As such, a puck-sized robot that doesn’t look like much might not seem very impressing at first glance. Coupled with a swarm of its brethren, however, things suddenly become more interesting.

Robot swarms have been interesting scientists for a while now because of their highly appealing prospects. Imagine thousands of tiny nano-sized bots that enter your bloodstream and make their way to key body parts to perform medical procedures. Like an army of ants, swarms of robots could communicate with one another, join forces and act as one to move objects and perform various tasks “single-minded” bots can not. What I personally find really interesting, is the coupling advantages of robot swarms. For instance, I while ago I wrote about some ping-pong ball sized and transformers-like robots that join together to share computing power, memory and limbs to form a new, re-configurable entity capable of performing an array of tasks – something that would become very useful in a highly dynamic, but low-resource environment like applications at the International Space Station.

Researchers at Sheffield University are doing their bit at bringing robotic swarms a step closer to becoming practical, after they developed hockey puck-like robots that can self-organise and work together to transport large objects.

“There’s no central entity that controls everything … all the little parts interact with each other, and complexity arises from these interactions,”  said Roderich Gross, head of the Natural Robotics Lab at the University of Sheffield.

When taken alone, each robot doesn’t seem like much: a tiny CPU housed in a cage-like housing that resembles a hockey puck, two wheels to allow it to move around, a camera, a microphone, a speaker,  an accelerometer and proximity sensors to detect nearby objects. When more of these objects, however, say 40 like in the case of the present research, meet and join together, they interact in ways that allows them to perform tasks impossible to attain all by themselves.

The purpose of the Sheffield University scientists’ research isn’t to demonstrate swarm robotics capabilities, however. What they’re looking for is discovering the minimum amount of information that an individual robot in a swarm requires.

“The key is to work out what is the minimum amount of information needed by the robot to accomplish its task,” said Gross. “That’s important because it means the robot may not need any memory, and possibly not even a processing unit, so this technology could work for nanoscale robots, for example in medical applications.”

As such the robots had their functions limited – which is something rather counter-intuitive since you’d expect one to use all the available resources to perform a task as effectively as possible –  in order to better mirror a microscopic environment (here, robot swarms are eventually thought to become most useful) where design limitations are very strict. So, rather than communicating with one hive mind, each robot coordinates itself and alters its behavior according to the closest robot.

With minimal amounts of information, the puck-like robots successfully arranged themselves into clusters or sorted themselves accordingly to various filters like based on color or using a light to represent the pull of gravity. What’s most remarkable, maybe, is that despite lacking a central nervous hub “e-puck” robots were able to cooperatively push large objects from one place to another with an 100 percent success rate. The route that they took was on average only 8.4 percent further than the shortest possible path, according to research to be published in the Proceedings of the IEEE International Conference on Robotics and Automation in May.

Be sure to check the embedded video below featuring Dr. Gross demoing his e-puck bots.