When self-driving cars finally take off, these should be safe. But right now, there's no guarantee they are. A small autonomus mini rally might help changed this.

Self-driving cars are all the rage in 2016, as businesses and people alike have started to take them more seriously. Right now, there are no purely self-driving cars on the road that you can buy, apart from Tesla roadsters that feature the semi-autonomous Autopilot.

When self-driving cars finally take off, they first should be safe. But right now, there’s no guarantee they are. Sure, these cars will cruise flawlessly on a highway and can even manage in busy traffic, but it’s in those crucial, split-second moments when something bad could happen that driving skills matter.

“Fully autonomous transport will require absolutely reliable navigation systems, major changes in highway infrastructure, and traffic control that’s synched to the vehicle, plus new fueling, insurance, financing, and manufacturing paradigms,” said Vivek Ghosal, a professor in Georgia Tech’s School of Economics, who studies the automotive industry.  “Yes, we have prototypes, but the operationalizing of autonomy is still far away.”

Imagine road conditions changing fast, from nice and smooth to muddy, or some lunatic cuts your lane at 100 mph. Can you count on a self-driving car to act better than your reflexes as a seasoned driver and, well, a human being that in that instant rallies all efforts to conserve itself? I wouldn’t count on it, just yet. But we’re getting there, and I have no doubt in my mind that self-driving cars are the future.

It takes time and a lot of hard work before that happens, though. One team from Georgia Tech is trying to make self-driving cars safer by teaching them to drive more aggressively, for instance.

They made an EV model car that only weighs 21 kilograms and is about 1 meter wide. Despite it’s only a fifth of the size a car should be to house a human, the mini rally car can dash to up to 100 km/h. It’s expendable, but scalable nature makes it a great proof of concept.

The Georgia Tech researchers devised a novel algorithm that works sensibly different from those currently used. Instead of splitting control and planning, the software combines them in real-time.

The downside is that this is very intensive on the computing hardware, but inside the rally car’s aluminium casing sits a quad-core processor and a massive Nvidia GTX 750ti GPU, as well as 32 gigs of RAM. The monster GPU does most of the heavy lifting which involves simulating 2,560 possible trajectories in parallel.

Each of these trajectories corresponds to the next 2.5 seconds of motion calculated for the car’s velocity. This entire process is re-computer 60 times every second.

Here’s how it fared in a test run where it was tasked with the obvious goal of not crashing while keeping the speed as close as possible to 8 meters/second. 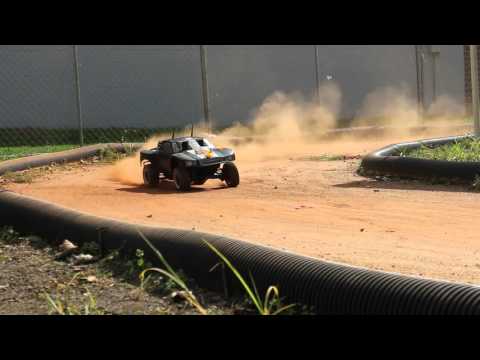 There were some near-misses and actual crashes, as you can see, but according to IEEE the researchers have since made an update which reportedly made the algorithm a lot better.

For all of you developers, Autorally has been released as open source on Github, so anyone can improve the design or fork.