These promise safer roads for everyone, but bikers are expected to benefit the most.

Self-driving cars promise to reduce pollution, traffic jams and save millions of lives by virtue of sheer computer-guided precision. Yet it’s not drivers and pedestrians who might have the most to benefit, but rather motorcyclists who are the most vulnerable in traffic. Some investors and analysts believe the safer roads self-driving cars promise to deliver will drive motorbike sales like crazy in the coming decades.

Riding a motorbike on American roads is one of the most dangerous things you can do. In 2015, motorcyclists suffered 14.2 percent of all traffic deaths despite they account for less than 1 percent of all vehicle travel mileage in the U.S.

Thanks to cheap gas, Americans are also driving more fatalities than any time since 1966. In the first half of this year, traffic-related fatalities climbed by 10.4 percent, according to Mark Rosekind who is the National Highway Traffic Safety Administration (NHTSA) chief.

One of the most common traffic scenarios that kills bikers is left turns by cars either in the same lane or coming from the opposite direction of the motorbike. Often times, reckless drivers misjudge the speed of the motorbike or simply don’t see it. This is how one in five bikers die on American roads. 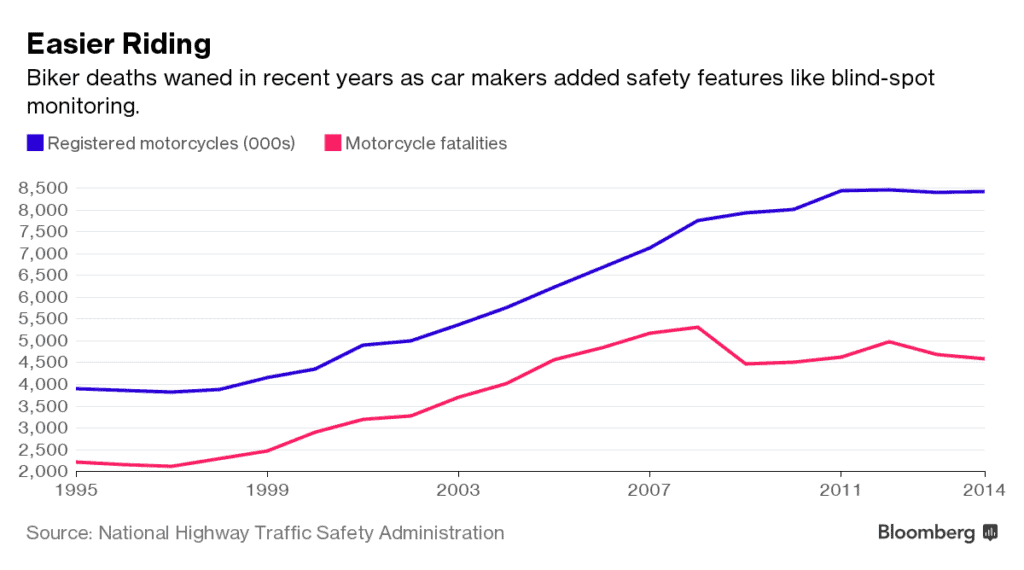 Self-driving cars, at least in theory, shouldn’t make these sort of mistakes. The result is a network of connected vehicles that create a sort of electronic safety cage for motorbikes. There would still be accidents but fatalities involving motorbikes ought to plummet while sales ought to skyrocket now that people feel safer and more confident on the road.

Speaking to Bloomberg,  Xavier Mosquet, a senior partner at Boston Consulting Group, said motorbike sales will see the greatest boost in the U.S., Chinese and Indian markets. Although purchase incentives differ — Americans ride bikes for fun while the Chinese and Indians choose bikes because they’re cheaper — safety ought to be lead to a huge spike in sales in these regions. Elsewhere in Europe, however, where people ride motorbikes to escape congested traffic sales are expected to increase at a much lower rate or even decrease since self-driving cars promise to significantly reduce traffic jams.

“I think it’s going to depend on the motivation and the location,” Mosquet said.

So, when can we expect self-driving cars to become the norm? Estimates vary from 2020, according to Mark Reuss, product development chief at General Motors Co.,to 2023, according to Elon Musk’s forecast. And yes, there will also be self-driving motorbikes. Both Yamaha and BMW are currently developing working prototypes, but experts believe these will lag behind self-driving cars by a decade.