A new study stresses the overlooked hazards that dumped pharmaceuticals found in wastewater pose to the world’s freshwater streams. So far, the impacts and consequences on water quality and aquatic life are unknown or under researched, and the authors hope their findings might warrant more work in this direction.

Dr. Emma Rosi-Marshall, lead author of the study published in the journal Ecological Applications and a scientist at the Cary Institute of Ecosystem Studies, looked at how  six common pharmaceuticals influenced similar-sized streams in New York, Maryland, and Indiana. These were caffeine, ciprofloxacin, metformin, cimetidine, ranitidine and diphenhydramine. The synthetic compounds that end up in the world’s streams as a result of aging infrastructure, sewage overflows and agricultural runoffs are in much greater number, however, ranging from stimulants and antibiotics to analgesics and antihistamines.

The focus of the study was on biofilms or the slippery coating found on stream rocks, as they’re most easily recognized as. These coatings, made out of algae, fungi, and bacteria all living and working together, are center to supporting aquatic life and greatly influence water quality, as they recycle nutrients and organic materials, while also making up a fundamental food source for invertebrates, which at their own term form the basic food source for other animals, like fish. 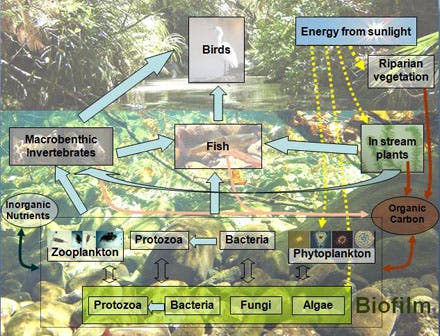 The authors’ findings suggest that the effects of waste pharmaceuticals are worrisome and need to be controlled. One of them, for instance, antihistamine has been found to dry out biofilms, while when exposed to diphenhydramine a 99 percent drop in biofilm photosynthesis was experienced. Diphenhydramine also caused a change in the bacterial species present in the biofilms, including an increase in a bacterial group known to degrade toxic compounds and a reduction in a group that digests compounds produced by plants and algae

“We know that diphenhydramine is commonly found in the environment. And its effect on biofilms could have repercussions for animals in stream food webs, like insects and fish. We need additional studies looking at the concentrations that cause ecosystem disruption, and how they react with other stressors, such as excess nutrients,” said  Rosi-Marshall.

Other substances’ influence on water biodiversity and quality were also found to have a measurable effects both alone and in combinations, using pharmaceutical-diffusing substrates. More work is required, however, for a broader picture of how various drugs, both alone and in mixtures, effect the freshwater stream environment. Results so far stress that a more thorough looks is required and considering most water treatment facilities in the world lack the necessary tools to filter out pharmaceuticals, the situation all of a sudden seems a lot more serious than at first glance.