Overgrowth of invasive algae can have huge detrimental effects both on the environment and on human activities. This is quite clearly observed in lake Erie, where a study published by the National Academy of Sciences documents some serious problems.

Farmers and the environment 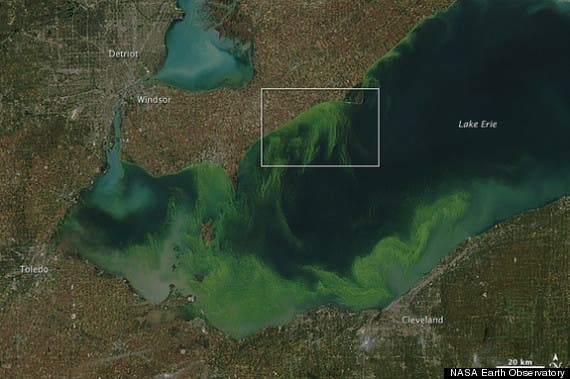 According to Anna Michalak, the study’s co-author and a researcher at the Carnegie Institution for Science at Stanford University, it all started with a mix of farm runoff, weather changes, and an invasive new plankton-eating species. As she explains, if this lack of response from the local community and authorities continues, the situation can only get worse.

In is the fourth largest lake (by surface area) of the five Great Lakes in North America, and the tenth largest globally. It is the southernmost, shallowest, and smallest by volume of the Great Lakes. The lake’s environmental health has been in question for decades, but especially during the past years, there have been hints that the situation is worsening dramatically. Issues such as overfishing and pollution have been on the table for a long time, but now, algal blooms are the main concern.

In 2008, there were concerns that the “newest invader swarming in the Great Lakes”, which was the “bloody-red shrimp” will harm the local popullation and encourage algal blooms. There are seasonal algal blooms each year in lake Eire, but in 2011, researchers’ fears were confirmed: a bloom reached 2.5 times the size of any prior bloom on record, turning the western lake green and coating the shores in a thick, green mat.

According to this study, fertilizer runoff from nearby farms is the major factor causing the growth in algal blooms. Local farmers have been using more and more land, applying more and more fertilizer. They have also been cutting back on tillage, the practice of working the fertilizer into the soil. This caused more fertilizer to seep from the ground into the lake, where it provides rich nutrients for the algae to grow. Warmer than average temperatures also give a “helping hand”, making it better mix with water.

Cyanobacteria and the dead zone

Researchers found that especially cyanobacteria thrives in these conditions. The problem is that when cyanobacteria blooms grow in a body of water, they literally suck all the oxygen out of the water, creating a dead zone. But there’s even more; if their concentration grows to a certain level, the water can become toxic, poisoning local wildlife and even people. The particular strain found in Erie produces a very dangerous liver toxin.

There’s one thing which also does not bode well for the native populations of Erie: patterns of climate change. As the trend for climate change continues in this way and runoff continues to be dumped or seep into the lake, algae will rule the lake.

This is all the more sad considering that lake Erie was once considered an environmental success story. In the 60s and 70s, the U.S. government worked with the Canadian government to implement the Great Lakes Water Quality Agreement. This agreement turned out to be quite a success, greatly limiting the expansion of algal blooms. However, it all fell appart in the 90s, when slowly but certainly, algae started to gain ground.

This pollution issue also causes health and economic concerns; an estimated 450,000 people fish in the Ohio waters of Lake Erie every year, contributing $680 million to the state’s economy. These people, as well as the 13 million people in the greater region, roughly three million Ohio residents, and 7 million annual tourists that drink water from the lake are threatened directly by these conditions.