by Mihai Andrei
in Environment
Reading Time: 3 mins read
A A
Share on FacebookShare on TwitterSubmit to Reddit 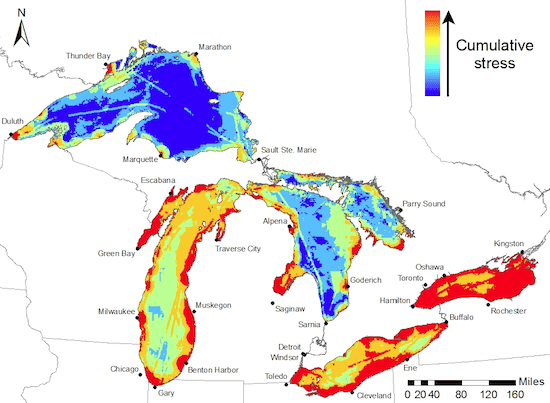 The threats are actually so numerous and diverse that a one-at-a-time approach just isn’t gonna cut it; instead, researchers argue, a more strategical, broad and well thought approach is required here.

“It’s almost a death-by-a-thousand-cuts syndrome,” said Peter McIntyre, a coauthor of the study and a professor at the University of Wisconsin-Madison‘s Center for Limnology.

Among the biggest threat is our old friend, climate change, which affects water temperatures and levels, invasive species of mussels and lamprey, ballast water from ships, human waste, and much more. Curiously enough, despite mining in the area, lake Superior remains relatively unaffected.

“There are many environmental stressors that affect an ecosystem, and the Great Lakes is a poster child for that,” he said.

The study, which was published Monday in the Proceedings of the National Academy of Sciences charts out the cumulative stresses which form on the lakes and their impact on the society which relies on the lakes providing 1.5 million jobs and $62 billion in paychecks annually, aside for entertainment for countless outdoor enthusiasts.

Over the course of 3 years, a mixed team of researchers from the US and Canada collected, then layered, data and reports and satellite images — previously available only piecemeal — to compile a single map that charts humans’ impact on the Great Lakes. No area in or around the lakes has a zero pollution impact, while some are extremely stressed – you can view the map here.

How bad is it?

What this study most importantly points out is that focusing on a single threat, even one as major as invasive species, is not going to have a significant effect, because the other threats will more than account for the damage. As a metaphor, McIntyre speaks of the lakes as a patient with multiple organ failure:

“It’s not going to do a lot of good to have a heart transplant if their kidneys and liver aren’t working.”

Interestingly and quite predictably, most of the red areas hug the shoreline of urban areas, including Detroit – urban pollution and waste are of course taking a toll on the ecosystem. But aside for urban waste, there’s another major factor which contributes to the environmental stress: agriculture, and most notably, phosphorous waste. Those are “some of the heaviest loads of phosphorous in North America“.

Currently, there is a $1-billion federal initiative trying to help the most stressed out areas, but McIntyre argues that even in the blue areas, less-extensive, less-expensive restoration efforts can have a wide impact given the interconnectedness of the Lakes.

Tags: great lakesProceedings of the National Academy of Sciences
ShareTweetShare