How do you annihilate lymphoma cells without any chemotherapy or drugs at all? Simply by starving it of the thing it needs most – High-density lipoprotein (HDL) cholesterol. 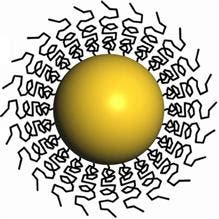 Northwestern Medicine researchers discovered a method of treating lymphoma with a new nanoparticle that works as a double agent – it appears to the cancerous cells as ‘food’ (HDL), but when ingested, it actually plugs it up and blocks cholesterol from entering. Deprived of an essential nutrient, the cancerous cell can’t survive.

The study conducted by C. Shad Thaxton, M.D., and Leo I. Gordon, M.D. shows that synthetic HDL nanoparticles killed B-cell lymphoma, the most common form of the disease in human-grown cells, and when tried on mice, it greatly prevents growth of human B-cell lymphoma. The paper was published yesterday, 21 January, in PNAS.

Initially, they tried this treatment as a supplement for already existing drugs, but soon after that, they used it on its own – only to find that the results are similar.

“We thought, ‘That’s odd. Why don’t we need the drug?'” Gordon recalled.

“This has the potential to eventually become a nontoxic treatment for B-cell lymphoma which does not involve chemotherapy,” said Gordon, a co-corresponding author with Thaxton on the paper. “It’s an exciting preliminary finding.”

The lymphoma cells are strictly dependent on natural HDL, from which they derive fat content. The created nanoparticle mimics the shape and size of HDL, but with a precious twist: it has a five-nanometer gold particle at its core. After the particle attaches itself to the lymphoma, it acts on two levels: first of all, it sucks out all the cholesterol with its spongy surface, and second, the gold core prevents it from absorbing more cholesterol. The results, researchers explain – are golden.

“At first I was heavily focused on developing nanoparticles that could remove cholesterol from cells, especially those involved in heart disease,” Thaxton said. “The lymphoma work has broadened this focus to how the HDL nanoparticles impact both the removal and uptake of cholesterol by cells. We discovered the particles are multi-taskers.”

They used gold because it is very compatible with living systems, but pretty much like every other treatment, as promising as the initial results are, more tests have to be carried until this can go clinical.

Tags: cancercancer curelymphomalymphoma cureProceedings of the National Academy of Sciences