by Mihai Andrei
in Biology, Climate, Environmental Issues, World Problems
Reading Time: 2 mins read
A A
Share on FacebookShare on TwitterSubmit to Reddit

NASA announced a truly unexpected phenomena, observed under the shrinking Arctic ice: a massive algae bloom under the ice. 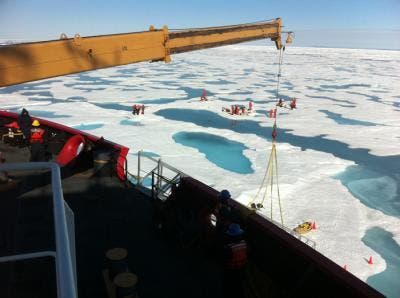 Not long ago, the life of this crucial plant seemed to suffer greatly, a worrying phenomena, as algae produces much of the world’s oxygen. The same year that NASA researchers launched the Icescape expedition to the Arctic, the world’s phytoplankton seemed to be in great trouble, disappearing at a rate of 1% for the past 100 years.

“A global decline of this magnitude? It’s quite shocking,” Daniel Boyce, Dalhousie University marine scientist and lead author of the 2010 study, told The Times.

The small algae go by their collective name: phytoplankton; it lies at the very foundation of the ecosystem, providing, aside from oxygen, the necessary nutrients for the entire food chain, so its dire times means dire times for every link of the chain; could this surprising bloom mark a turnaround for it? Does this change the situation for the entire picture ? 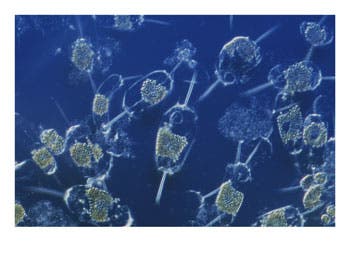 “The question becomes, if we take our current finding … does it change that global picture,” she said. “That’s one of the things the science team is going to have to look at. … It most certainly changes what we thought was happening in the Arctic.”

Also, linking things with global warming and local climate change, scientists still aren’t sure of this is good or bad.

”It’s premature to say if it’s good news or bad news,” Bontempi said. First scientists must get their arms around this discovery — which has been likened to finding a rain forest growing beneath the Arctic ice — an occurrence scientists “never ever could have anticipated in a million years,” she said.

Indeed, every earlier study indicated phytoplankton populations shrinking significantly, and no one ever thought they could find something like this under the ice – nor do they know how long this has been happening. It’s not that NASA is blind or that the satellites monitoring the area aren’t functioning properly, it’s the fact that the ice was really thick – ‘thanks’ to global warming, that problem was solved.

So yes, the phytoplankton seems to thrive under the Arctic ice for quite a while. What does this mean? Why is it happening, especially as one can only wonder how the plants are getting their necessary light? Our planet is truly fascinating. Things are happening here that we never even could have imagined.