Octopus with venom that works in freezing temperatures discovered

by Mihai Andrei
in Environment, Health & Medicine, Studies
Reading Time: 2 mins read
A A
Share on FacebookShare on TwitterSubmit to Reddit

Boy, you just can’t have enough octopus, that’s for sure – they’re really amazing creatures, that often surprise us. Now, a venomous octopus living in the frozen waters of Antarctica is definitely awesome, but how is this useful? 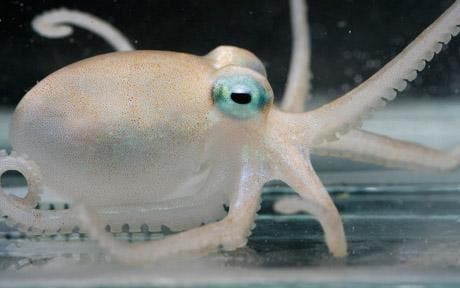 Well, according to Bryan Fry, of the University of Melbourne, it is. He and his team have been studying how evolution changed the way this octopus hunts, as well as the nature of the venom. The way they do things is drill small holes into large, shelled prey and then inject the toxic saliva.

“We found that venom can work at sub-zero temperatures. It was quite remarkable to find how well octopuses have adapted to Antarctic life,” Fry said.

He also noted the remarkable diversity of the species, with specimens varying in size from as little as a few inches to several meters.

“Evolutionary selection pressures slowly changed their venom, which allowed them to spread into colder and colder waters and eventually spread into super-cold waters,” Mr Fry said. We want to see what cool and wonderful new venom components we can find out of these venoms that would be useful in drug development,” he said. Nature has designed a perfect killing weapon … they have such incredibly accurate activity that there has to be a way to harness that. To tweak it or modify it or just use one little chunk.”

If we take a look at hypertension drugs (such as ACE inhibitors) that are modeled after snake venom, and other diabetes drugs (modeled after lizard saliva), it is understandable where the benefits of this study could pop up.