by Mihai Andrei
in Environmental Issues, Oceanography, Studies
A A 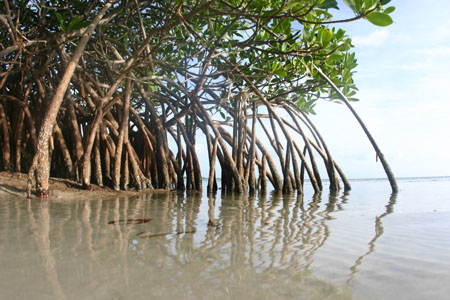 A few days ago, I wrote about the damage that a well intended, but wrongly conducted mangrove restoration could cause; the article itself was focusing on the Philippines. It is time to underline (again) the importance that they have on ecosystems which rely on them way more than you would probably guess.Just a few days ago, Mexican researchers have showed just how important mangrove abundance is for the local fishing industry and economy alone. The mangroves have been affected by tourists and the local shrimp farms, which are quite numerous in the area, destroying trees and wetlands and replacing them with beaches. Octavio Aburto-Oropeza, a researcher at the Center for Marine Biodiversity and Conservation, at the US-based Scripps Institution of Oceanography analyzed data over 4 years, from 2001 to 2005, and found old and new arguments that support the importance mangroves have as nursery and feeding ground for a significant and vital part of marine wildlife.

“In the Gulf of California, 32 per cent of the varieties of fish and crabs with commercial importance are related to the local abundance of mangrove,” Aburto-Oropeza told SciDev.Net. They even manage to make an estimate of the economic value of the forests, though it has to be clearly understood that the commercial interests come, or at least should come, in 2nd place. I also doubt how accurate this estimate can be; but even so, the value which they found ($37,500 per hectare per year) is way bigger than the benefits that other activities bring.

So it should be understood that after a first glance and a thorough analysis, green initiatives and wealth have to go hand in hand; it’s not how it should be, it’s not how it will be everywhere, but it is how it will go most of the time. So aside from understanding the virtually unlimited environmental value that certain plants, animals and areas (such as mangrove forests) have, we have to understand their economical value too.