Holographs – coming soon to a screen near you 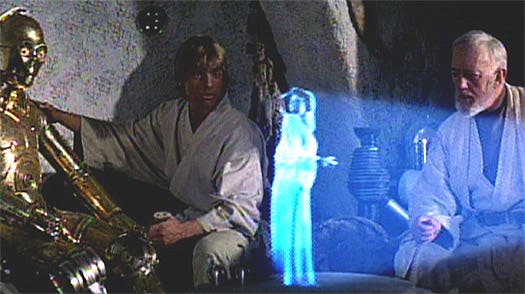 The race to develop holographic videos will have its winners and its losers, but it’s obvious by now that this isn’t some distant sci-fi technology, but rather a work in progress, as rival research teams battle to be the first to control lasers in a way that would allow displaying 3D videos.

The evergrowing power of computers allows continuous progress in numerous fields, including this one, and as computers become more and more performant, scientists start to think about an inexpensive and portable system that can handle holographic displays, according to Michael Bove, a holographer at the Spatial Imaging Center at the Massachusetts Institute of Technology’s Media Lab.

“We now see a clear path to that [system],” he said. With several research groups actively pursuing the problem from different angles, he said, we may see holographic video in homes within ten years.

In order to create a holograph, lasers are used to write on a transparent surface, changing the material’s properties and mimicking light scattering of a real object. After one image is displayed the laser pulses again and reorients the material’s molecules so that it displays another image. The fuss around this technology is so large that it caused a significant amount of friction between the two teams, which sadly, will probably lead to slowing down the developments.