Self-braking system for cars could save countless lives

by Tibi Puiu
in Research, Technology
Reading Time: 3 mins read
A A
Share on FacebookShare on TwitterSubmit to Reddit 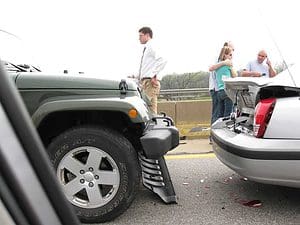 There were 5.4 million automobile crashes on U.S. roads in 2010, killing 33 000 people and injuring more than 2.2 million, according to survey released by the U.S. National Highway Traffic Safety Administration. The death toll around the world is much higher. While cars  have been designed to be a lot safer by making them more crash resistant in the past decades, there is still a lot of room for improvement. A new research conducted by scientists at  Virginia Tech’s Center for Injury Biomechanics sought to determine the effectiveness of a proximity warning and a self-brake system potentially employed in motor vehicles. Their findings suggest that serious injuries could be cut in half were such a system be in use today, while many accidents could be potentially averted altogether.

The researchers Clay Gabler, a professor of biomedical engineering, and Ph.D. student Kristofer Kusano, studied a safety systems based on a sort of radar that signal the driver when it is approaching in dangerous proximity to another vehicle. When the the distance between the two cars becomes too narrow, an audio beep signals the driver to slow down or commence braking. Another system offers braking assistance if the driver responds to the warning by applying the brakes, while another type attempts to bring the car to a halt with a huge braking force if the driver has not hit the brake pedal 0.45 seconds before the sensors predict that there will be contact.

To this end, the scientists went through  5000 car crash records, complete with information such as photographs and diagrams of the crash scenes, police, driver, and occupant statements, and vehicle damage assessments,  and inputted the data into a computer simulation where 1400 crashes were recreated. After the safety systems were put in place, findings showed that the electronic safety systems would slow cars down enough to cut the number of serious injuries in half and avoid 7.7 percent of rear-end collisions altogether.

“Even if the driver is distracted and does nothing, a system of this type would brake forcefully enough during that final half second before impact to slow a car traveling at [72 kilometers per hour] by about [10 to 12 km/h],” says Clay Gabler, who is also assistant director of the Center for Injury Biomechanics. “That might not seem like a lot,” he says, “but the aim is to reduce the energy of a collision. And since kinetic energy is related to the square of velocity, this change in speed reduces the likelihood of serious injury by about 35 percent. That’s huge.”

The findings were reported in the journal IEEE Transactions on Intelligent Transportation Systems.