One in five Brits believe lightsabers are real. Science or Fiction?

by Tibi Puiu
in Other, Research, Science
Reading Time: 2 mins read
A A
Share on FacebookShare on TwitterSubmit to Reddit 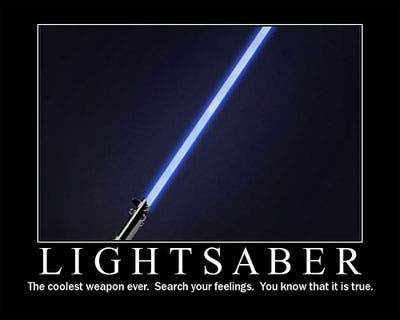 While a number of today’s science innovations which most of us take for granted, like airplanes, automobiles, computers or space flight, have been outlined by imaginative science fiction writers before they were possible, it seems there’s a concerning blurred line between what has actually been made possible by science and what is of the realm of science fiction in the minds of some Britons.

One in five Brits, for example, believe that the light sabers like the one any sane child of the last century has witnessed in the epic Star Wars flicks are real – a statistic furnished by Birmingham Science City, revealed in a survey, launched at the start of National Science and Engineering Week (11-20 March). According to the survey:

“We commissioned the survey to see how blurred the lines between science fact and fiction have become,” said Pam Waddell, director of Birmingham Science City.

“While films and TV can be acknowledged as creating confusion, it is also worth highlighting how advanced science has now become, and many things deemed only possible in fiction have now become reality or are nearing creation due to the advancements of science,” she added.

If you’d like to test your knowledge of science fiction and fact, take this very short Birmingham Science City quiz, and then compare your answers to how 3,000 others did.

National Science and Engineering Week runs through March 20 in the U.K.