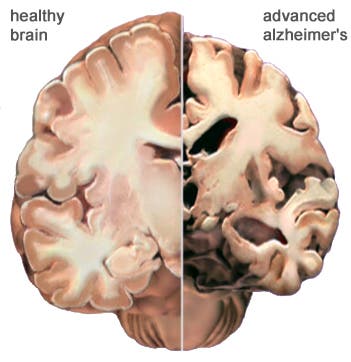 Recently, numerous developments in Alzheimer research have been made, including a ‘brain pacemaker‘ and the discovery of an extremely promising chemical, p7c3, that might help treat patients. This time, researchers went for a different approach; what happens in Alzheimer is that the brain basically grows some lumps of protein, developing formations known as amyloid plaques that prevent it from working properly. This study, revealed in the September 17th print issue of Cell seems to have found a way to make something useful with the amyloid precursor protein (APP for short), the main ingredient in these plaques.

At its very core, APP is a iron oxidase whose job is to transform iron into a safer form and ready it for transport throughout the body. If it doesn’t work right, like in Alzheimer’s disease, iron levels get really high and they become toxic.

“This opens a big window on Alzheimer’s disease and iron metabolism,” said Ashley Bush of The Mental Health Research Institute, University of Melbourne.

“Although people have attributed several important physiological roles to APP,” added Jack Rogers of Harvard Medical School, “this now gives us an idea of what this critical protein does to underpin its role in iron metabolism.”

However, this amyloid alone can not explain what happens in the brain during Alzheimer. In order to do that, you have to look deeper and analyze the different metal concentrations in the brain.

“There has been a lot of attention on amyloid, but it seems it is not a simple matter of amyloid as the sole culprit,” Bush said. For one thing, trials of drugs designed to target and clear amyloid plaques haven’t worked as intended.

The findings suggest that zinc may be the ideal target in the war on Alzheimer.

“Our findings authenticate zinc as a target,” Bush said. “It really makes it look like an attractive place to hit.”

Although researchers don’t want to raise hopes too much, an Alzheimer cure, or at least a way to significantly slow down the progression of the disease seems more and more close.