Founder of Paypal, Tesla Motors and SpaceX, Elon Musk has gained the reputation of a brilliant entrepreneur and engineer. By many he’s viewed as a real life Tony Stark, a comic book and, most recently, Hollywood blockbuster character better known by his Iron Man persona.

Musk in many respects,  in my humble opinion at least, is actually more able than Stark. From an ethical point of view, Stark is quite despicable. While Stark chose to continue his family legacy acquiring a vast fortune from weapons manufacturing, Musk raised his billions through high-risk businesses on a mission to better humanity, a business model few people choose to follow. Then, Musk is real, whereas Stark is pure fiction. Clearly, Musk tops Iron Man, but that doesn’t mean that he can’t take inspiration from the comic strip super hero.

Recently, Musk showcased how he hopes high-end engineering at SpaceX will take place in the near future. Combining currently existing technology like Leap Motion, Oculus Rift and precision metal 3D printing Musk’s team have set-up a virtual lab that might change the way engineers design anything from spacecraft to buildings to proteins. If you saw any of the Iron Man movies, then you’ll reminisce.

Musk reasons that we interact with current technology in a 2D frame to create 3D objects. In typical engineering projects, like say designing spacecraft components, engineers first need to figure out how to manipulate their software environment so they might render what is already in their heads.

Musk presents what he calls a more natural approach to designing. Using the Leap Motion, on which I wrote extensively before, and the Oculus Rift, a virtual reality hand-set, SpaceX has develop a highly interesting environment, which can be used either with a typical PC display, a projector and even on a transparent glass surface, exactly like in Iron Man. I his demo, Musk showcased the tech by manipulating SpaceX’s Merlin engine, and to top things out, he used a metal 3D printer to create on of the engine’s parts, effectively pulling it from the virtual environment into reality.

Check out the presentation below. 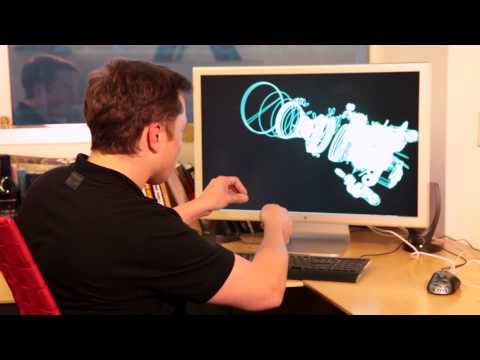 So, what do you guys think?
Tags: elon muskleap motionSpaceXvirtual reality
ShareTweetShare
ADVERTISEMENT
ADVERTISEMENT
No Result
View All Result