by Tibi Puiu
in Animals, Research
Reading Time: 2 mins read
A A
Share on FacebookShare on TwitterSubmit to Reddit 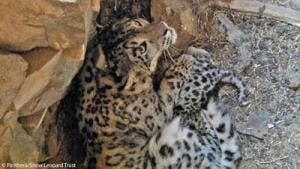 Magnificently beautiful, the elusive snow leopard is a large cat native to the mountain ranges of Central Asia. Adapted to living in high altitudes, deep in the mountains, and preferring typically inaccessible areas for humans as their dens, has made snow leopards extremely hard to spot, and more importantly keep track off, since it’s an endangered species. Actually, just until recently, there has been no recorded footage of a snow leopard den.

Now, following the research work of scientists from Panthera, a wild cat conservation organization, and the Snow Leopard Trust (SLT), not one, but two snow leopard dens have been located and filmed. Little is known about the elusive species, and this recent discovery will serve as an invaluable piece in the puzzle which serves to describe the life story of the snow leopard.

“We have spent years trying to determine when and where snow leopards give birth, the size of their litters, and the chances a cub has of surviving into adulthood. This is one of those exceptional moments in conservation where after years of effort, we get a rare glimpse into the life of an animal that needs our help in surviving in today’s world. These data will help ensure a future for these incredible animals,” stated Dr. Tom McCarthy, Executive Director of Panthera’s Snow Leopard Program.

Scientists, along with a veterinarian, entered the two dens (one with a cub, the other with two), while the mothers were away hunting. The three cubs were carefully measured, weighed, tagged with a chip the size of a grain of rice, and photo documented. The team monitored the mothers’ locations to ensure that they returned to their dens and their cubs, which they successfully did.

“Knowledge about the first days and weeks of life is vital to our understanding of how big cat populations work, and how likely it is for a newborn to reach adulthood and contribute to a healthy population. A valid conservation program requires such information, which this new development in snow leopard research provides,” said Dr. Howard Quigley, Panthera’s Executive Director of both Jaguar and Cougar Programs.

The gathered information in the upcoming months from their present effort, coupled with camera traps footage, information from captive specimens in zoos and whatever little else scientists know about the snow leopard will help organizations in their conservation plans.