Open access to science – its implications discussed in UK raport

by Tibi Puiu
in Research, Science, World Problems
A A

Today, only 10% of the currently published scientific papers are open access; freely available to the public online in their entirety. A recently published report commissioned by the UK’s Minister of Science encourages scientists to publish their works in open access journal and claims the benefits of an open access system outweigh the downsides.

The team of experts who oversaw the report was lead by Dame Janet Finch , who argues that the issue at hand first of all possess a powerful “moral” case. Science should be free and available to everyone is the conclusion which the reports seems to reach. This would, however, mean that scientific journals should lift their dreaded “pay-walls” and cancel their paid subscriptions.

At the very dawn of modern science, science journals were THE way for a scientist or company to keep themselves updated to the various progress registered in the world or share their own progress. Much of the current scientific progress is attributed to the reach and development of science journals, and even today the process has changed very little. 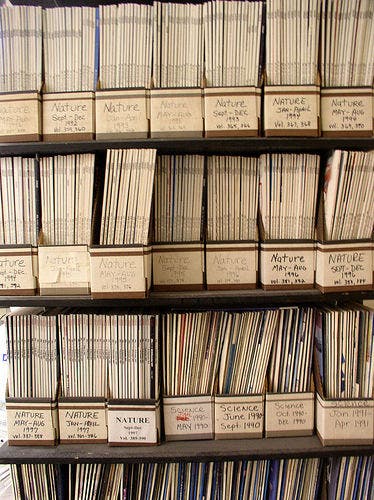 A scientist who has completed a scientific work, which he believes is worthy of being publicized, as in it offers value, will submit it for review to a scientific journal he believes best fits his paper. A team of editors then decide if the respective paper is of note or not; if indeed it is found of note, the paper is then transferred to a panel of experts who subject the paper to scientific scrutiny – this is peer review. If the experts find flaws in the paper, it is rejected or more explanations are required from the author; otherwise the paper is prepped for publishing. The peer review system is considered to have greatly contributed to the current high standard of scientific research, however like all things it costs money.

The money comes from subscribers; to read a certain paper, you need to pay for it. More importantly, if you’re working in a particular field of science where some sort of breakthroughs occur, they’ll be totally unbeknownst to you if you’re not a subscriber. If you don’t have access, it’s like living in cave. Sure, you could pay for a subscription, but there are countless scientific journals still in press today, a lot of information is bound to escape you. And what about students or simple science enthusiasts? Scientific research is typically public funded; why should then publishers profit off of this? The biggest and most influential scientific journals are Nature and Science, both are paid-walled. You might agree that open access to science is simply the obvious right thing to do, but in such a controversial situation things aren’t always easy and, for one, the people opposing such a move aren’t necessarily wrong in their claims either.

For one, the high standard of science I mentioned earlier might be at risk. An article at thisismoney.co.uk claims that if the local government were to impose open access to all UK based research, an estimated £1billion of income and thousands of jobs could be placed at risk. Then there’s the issue of plagiarism; the article I just referrenced offers the currently dying music industry at the hand of piracy as a comparisson of what might happened were science to become open. The analogy isn’t that well put, but it does make a point. With open access, plagiarism would become a lot easier and tempting, a fact that would be deeply detrimental to true science. Some academic publishers and researchers fear that scientific and other academic studies, paid for by the taxpayer, will be made freely available to researchers in China and elsewhere in the Far East. These and more are just a few arguments that suggest the current system is still well placed.

These are only a few voices, however – particularly influenced by personal interest, I’m willing to bet in some instances. Most scientists in the UK have expressed their excitement and full-pledged support for such an initiative.

“At my institution we are lucky enough to have access to many journals. But inevitably myself or one of my colleagues occasionally needs to see something that we haven’t subscribed to and so we have to pay a fee to see research that has been publicly funded.

“So it would be tremendously useful for our research if we didn’t have to think twice about this sort of thing”, said Prof Elizabeth Fisher, a world class neuroscientist at University College London.

“Open access is in our marrow,” he said, “greater access is for the greater good”, Professor Adam Tickell, pro-vice-chancellor for research and knowledge transfer at the University of Birmingham.

One of Dame Janet’s recommendations is to require the funders of research to set aside £60 million each year to pay the administrative fees for publication in open access publications. That might pay for the panels of experts and editorial staff for the various scientific journals, though the real sum might have to be a lot larger. Some journal might go out of business a cease publishing, and for certain profit will cease to become a reality for most publishers. Science and profit shouldn’t never go hand in hand, though.