The red flag was, ironically, the fact that reviewers responded to emails on time.

by Mihai Andrei
in News, Science
Reading Time: 4 mins read
A A
Share on FacebookShare on TwitterSubmit to Reddit

The red flag was, ironically, the fact that reviewers responded to emails on time.

The journal Tumor Biology has just retracted 107 research papers after discovering that several authors faked the peer-review progress. It’s not the first time the journal has done something like this — last year, 58 papers were retracted from seven different journals, and 25 of them came from Tumor Biology.

Valuing research is always hard. If you’re studying something that no one else has studied before, who can judge if you’re doing a good job or not? Unfortunately, there’s no perfect answer to that question, but there is a pretty good one, which hasn’t been topped for hundreds of years: peer review. Peer review is the evaluation of work by one or several people of similar competence to the authors — basically, you find the “peers” of the scientists and have them analyze the work. It constitutes a form of self-regulation by qualified members of a profession within the relevant field and it pretty much defines a quality scientific journal.

Because the niches of scientific research have diversified so much, authors are often asked to suggest peer reviewers for themselves. Who better knows who can understand your work than you, right? Well, that sounds pretty good in theory, but some journals take things even further. They ask authors to submit the contact details of these potential reviewers. By now, you probably see where this is ongoing — a malicious author can submit fake contact details, the journal editor merrily sends an email to that fake address, the fake review is submitted and all is good. The paper gets published.

It’s not always the authors that do the forging. In this case particularly, a possible culprit is a third-party, a company which non-English authors sometimes use to correct language and grammar mistakes.

“There is some evidence that so-called third-party language-editing services play a role in manipulating the reviewing process,” said a spokesperson for Springer, the company that published Tumor Biology until this year.

However, there are some things which they haven’t yet learned to forge.

“When a lot of the fake peer reviews first came up, one of the reasons the editors spotted them was that the reviewers responded on time,” said Elizabeth Wager, editor of the journal Research Integrity & Peer Review to Ars Technica. Reviewers almost always have to be chased, so “this was the red flag. And in a few cases, both the reviews would pop up within a few minutes of each other.”

Well, thankfully, sometimes these scammers get caught, and this is what happened here. My feelings toward the journal are quite mixed because on one hand, this shouldn’t have happened in the first place, but if it does happen it’s really good when you catch them. After all, 107 papers is no joke, that’s a pretty huge amount for any journal.

The retraction statement was pretty dry [printscreen below]:

“The Publisher and Editor retract this article in accordance with the recommendations of the Committee on Publication Ethics (COPE). After a thorough investigation we have strong reason to believe that the peer review process was compromised.” 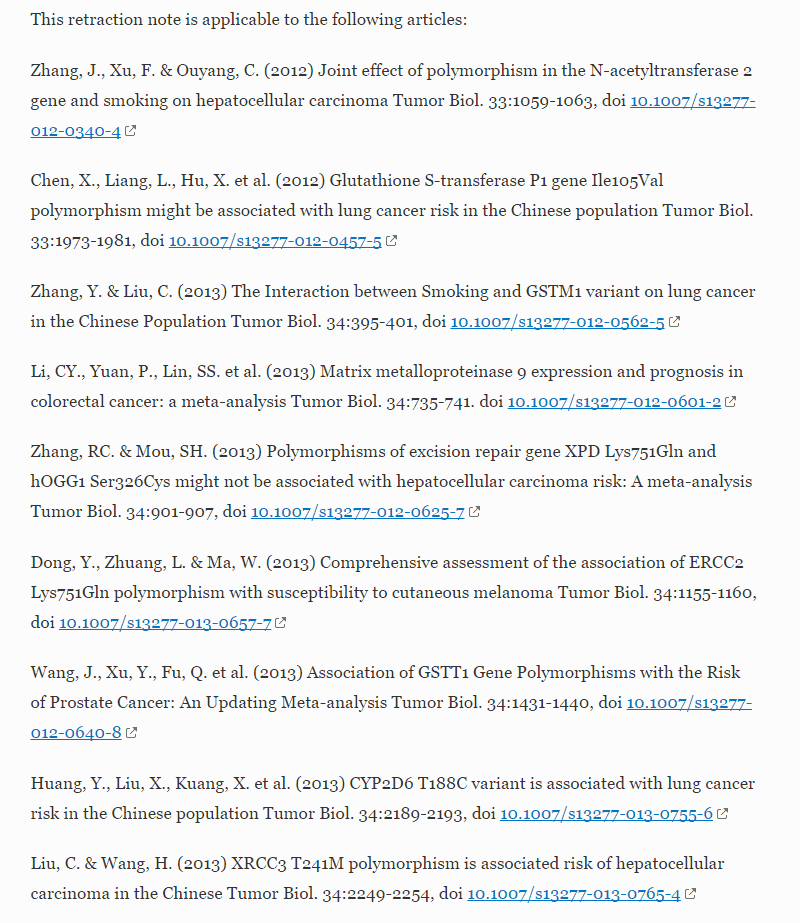 But looking on the list of names, it’s not hard to see that most if not all the authors are of Chinese origin. Considering that we’re talking about more than 100 papers, this seems a bit too much to be a mere coincidence. The Chinese “fake science industry” has been exposed before, though this is not necessarily the case here. For starters, the authors I’ve seen don’t actually work in China, but rather in Europe or North America (I haven’t looked at all of them though), so this could very well be the case of a predatory company taking advantage of naive researchers… or it could be unethical scientists, taking advantage of an imperfect system. We don’t know yet, and this is why it’s very important to keep an eye out for such instances of fraud.

Tumor Biology was passed from Springer to SAGE in January, and SAGE have pledged to avoid similar problems in the future.

“[Springer] were open about the past instances of peer review fraud, and as part of the relaunch they wanted to address the underlying reasons,” a SAGE spokesperson told Retraction Watch. “The Tumor Biology editorial team have already introduced new robust peer review practices expected from all SAGE journals.”