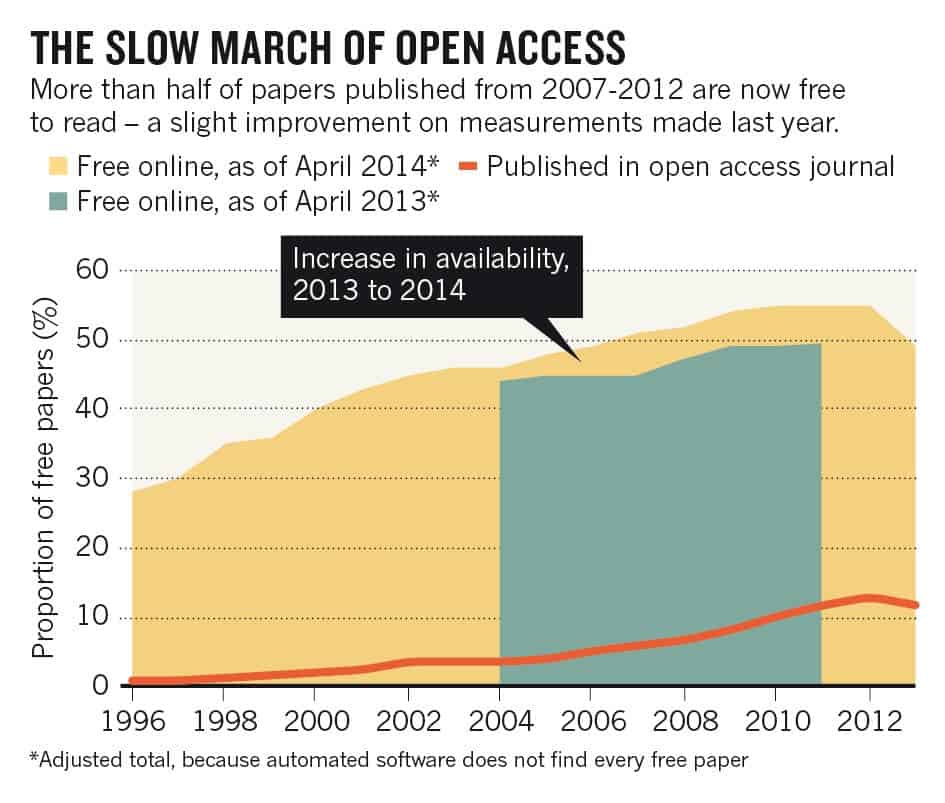 “A substantial part of the material openly available is relatively old, or as some would say, outdated,” writes Science-Metrix, a consultancy in Montreal, Canada, who conducted the study, one of a series of reports on open access policies and open data.

The problem is that peer review data is usually made available after a delay, but there are many reasons to be happy about the evolution of published science. For starters, the number of studies published in open-access journals continues to rise, reaching almost 13% in 2012. The bulk of the Internet’s free papers are available through other means – made open by publishers after a delay, or by authors archiving their manuscripts online. But the number seemed to remain stable at about 40%, and as I said above, the main problem is a delay.

“The fundamental problem highlighted by the Science-Metrix findings is timing,” writes Stevan Harnad, an open-access advocate and cognitive scientist at the University of Quebec in Montreal, Canada. “Over 50% of all articles published between 2007 and 2012 are freely available today. But the trouble is that their percentage in the most critical years, namely, the 1-2 years following publication, is far lower than that. This is partly because of publisher open access embargoes, partly because of author fears and sluggishness, but mostly because not enough strong, effective open access mandates have as yet been adopted by institutions and funders.”

The results are estimates, and not a complete analysis on every single paper – so the actual numbers may be a bit off. Another thing worth noting is that many of the articles, although free to read, do not meet formal definitions of open access – for example, they do not include details on whether readers can freely reuse the material. So basically, some of the articles you may read for free may not be considered open source.

There were significant differences based on the field and country; for example, biomedical research (71% estimated free between 2011 and 2013) is one of the most open areas, while chemistry for example is much less open (39%). The study also showed that compared to the world average (54%), some countries fared better (Brazil – 76%, Netherlands – 74%). As for the UK, where the nation’s main public funder, Research Councils UK, has set a 45% target for 2013-14, has already reached 64% in previous years – so things are looking good.

This comes right after next week, the ‘Open Access Button’ was launched in London – a website and app that allows users to find free research. If no free copy is available the app promises to email authors asking them to upload a free version of their paper – with an explanation direct from the user who needs the manuscript.

“We are trying to make open access personal – setting up a conversation between the author and the person who wants access,” says Joe McArthur, who co-founded the project and works at the Right to Research Coalition, an advocacy group in London.

It does seem like we are entering a new age in research availability – and it really is exciting. It’s a slow process and there are many bumps along the road… but we’re getting there.