How much is your university paying for journal access?

by livia rusu
in News, Research, Science
A A 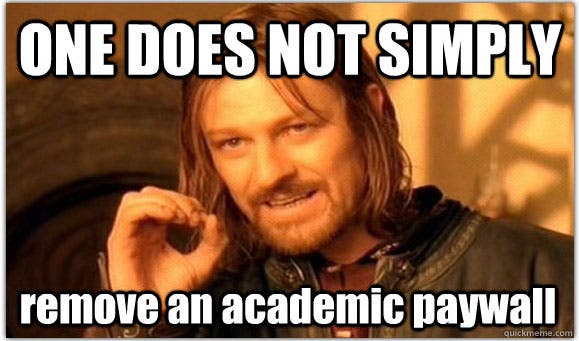 At the turn of the 1990s, scholarly publishers were increasingly concerned about what had become known as the serials crisis. Journal subscriptions were rising at an average of 10% per year, which in turn meant each year libraries were struggling harder to keep up and in, consequence, many would cancel. To counter, publishers would further increase their pricing, then more and more libraries would cancel, and again rinse and repeat. The result: a vicious cycle that threatened to undermine a 350-year-old scholarly publishing system.

Then came 1996 and Academic Press (AP) introduced what would become known as the “Big Deal” – online subscriptions to large bundles of electronic journals sold at a fixed fee for an arranged period of time (typically three years). Much like home cable subscriptions that include hundreds of TV stations, the Big Deal came with an all-you-can-eat offer for universities and libraries – and they all gobbled it up whole! At first glance, the system, which was soon adopted by all the other big publishing houses, was a breath of fresh air and came as a solution to a desperate problem.

The administrative tasks involved in subscriptions was dramatically shortened, as now there was just one collection of journals (i.e., the entire portfolio published by AP) and just one customer. Second, if the license fee was paid by means of top-slicing, the pressure on library budgets would be less severe. Finally, by bundling its entire portfolio of journals in a single product, AP could hope to break the cancellation cycle, since the bundle would be offered on an all-or-nothing basis.

Almost twenty years later, the Big Deal turned out not to be that much of a bargain. The Big Deal is like a single all-you-can eat subscription for a set fee, however libraries soon learned that there are many downsides to consuming academia in a bundle. Most libraries would spend a great deal of their budgets on the Big Deal, then would find themselves lacking funds for other important purchases like buying monographs, which had an impact on scientists and other researchers alike, a situation exacerbated by the fact that the proportion of research university funding allocated to libraries has been falling over time.

“Big Deals consume a disproportionately large percentage of the total library materials budget, and often the purchase of books suffers because monies have to be prioritised for journals,” says Paul Ayris, director of library services at University College London. “This affects scholarship in the Arts, Humanities and some Social Sciences since the unit of publication in these areas is still the book.”

But it would be wrong to portray the Big Deal as a cunning plan by publishers to entrap librarians, as some conspiracies might have us believe. So, libraries should hold no ill grudge for this, but they have other reasons to be unhappy. One being that journal charge preferentially for their subscriptions, as revealed by an investigative paper published in Proceedings of the National Academy of Sciences. It’s not that universities and libraries pay a different price for the same bundle – this is something we all knew somehow – it’s the crazy inequality of it all. 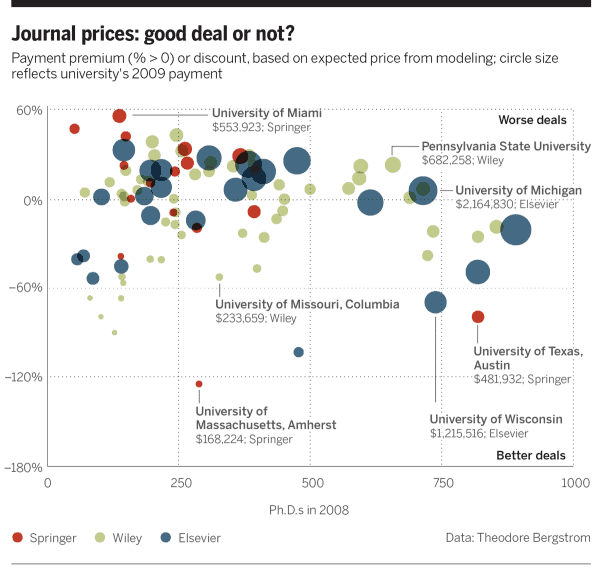 Universities negotiate with academic publishing companies behind closed doors, and those deals usually come with nondisclosure agreements that keep the bundled prices secret. The authors of the study got ahold of “big deal” contracts with publishers (non-profit and for-profit alike) from 55 public university libraries and 12 consortia via FOIA (Freedom of Information ACT) requests or just plain asking nicely. It wasn’t no easy task, of course – Elsevier, Springer and the other big publishing houses contested the request for contracts from libraries like University of Texas or University of Washington, but the courts eventually ruled in favor of the researchers involved. The authors found that:

“The contracts we have seen show remarkable institution-specific price variation that cannot be explained by university characteristics such as enrollment and PhD production. Some institutions have been quite successful in bargaining for lower prices wheras others may not have been aware that better bargains can be reached. Perhaps this variation explains publishers’ desire to keep contract terms confidential.”

Take the case of University of Oregon and Oklahoma State University – both are similar in size and numbers of PhDs graduated each year, yet OK State paid $185,795 for the Wiley journal package and the University of Oregon paid $285,036. There are many other cases you can find in the full paper, and what this goes to show is that pricing is not made over some objective metrics, but rather by bargaining. University of Michigan paid almost twice as much as the University of Wisconsin for the same Elsevier package. Not coincidentally, UM’s acquisitions budget is almost double the size of UW.

So, is this the Big Deal libraries have been waiting for? In light of all this, I can only hope and wish that efforts that try to make journal entries open access for everybody, whether you’re in a library or home on your personal computer. Even so, the big publishing houses will rejoice just as well. It will be the government’s money that will pay for the subscriptions, instead of the libraries, and their money is the best and fattest in the world, straight from your pocket.