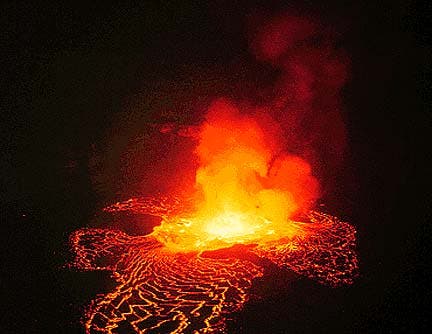 Scientists have for the first time determined the actual permeability of the asthenosphere in Earth’s upper mantle, which is basically responsible for how fast the melt rises towards the surface of the earth, and the results were surprising to say the least. Researchers found that it actually moves 25 times faster than previously assumed, which forces us to reconsider every volcanic model that includes melt.

A huge centrifuge measuring 2 meters in diameter was embedded in the cellar’s floor. It spins at 2800 rotations per minute and creates an acceleration about 3000 times bigger than Earth’s gravity; when at full capacity, it creates 120 decibels, which is about as loud as an airplane, according to Max Schmidt, a professor from the Institute for Mineralogy and Petrology at ETH Zurich. It can reach 850 km/h, and after it reaches this speed, if you would turn it off, it takes about an hour to stop.

This globally unique centrifuge cast a whole new light on how we perceive magmatism. The researchers used it to simulate the transport of molten lava made of basaltic glass from the mid-ocean ridge. The matrix through which the melt passed through consisted of olivine, which makes about 2/3 of the upper mantle. They applied a temperature of 1300 degrees and a pressure of 1 giga pascal. After the basaltic mass melted, they accelerated to about 700 g’s and were then able to calculate the permeability directly by microscopic analysis and were then able to correlate porosity to permeability, which is a main part for thermo-mecanical models.

In the light of these new discoveries, these models have to be revised; if the magma ascends much faster that means it interacts a lot less with the rock it penetrates. It also explains a few things, such as why volcanoes are active for only a few thousand years.