When CSI and geophysics meet

by Mihai Andrei
in Physics, Science
A A

We probably all know (especially thanks to the abundancy of TV series) what Crime Scene Investigators (CSI) are. Probably not so many people know exactly what geophysics is. As the name says it (geo=earth), geophysics studies the phyisical properties of the Earth, such as gravity, electromagnetism, plate tectonics, and extremely numerous other ones; it is commonly used for prospecting oil and mineral resources, as well as for environmental hazards, and even in archaeology. At a first glance, these two fields would have absolutely nothing to do with one another, but that’s not true at all.

Researcher Dr Jamie Pringle of Keele University knows how much geophysics can help CSI, by finding objects located underground or underwater, such as a murder weapon, a body, or even smaller clues. About 25% of all murder victims are dumped underwater, and 15% of them are buried, so that makes almost half of all murder victims. Some times, dogs or metal detectors are all that’s needed, but in well thought crimes, in which the killer has time to bury deeper, that’s just not good enough.

‘A lot of clandestine burials are done in a panic and those are easy to find,’ says Pringle. When dealing with more well thought out murders, it can be much more difficult, and this is where geophysics can come to the rescue.

So, in order to test the different ways of detection, a few bodies had to be buried; thankfully, it wasn’t about humans, but pig bodies, which(even though most people don’t like to admit) have a lot in common with us  – at least physically. In order to ‘see’ what’s underground, when dealing with this kind of cases, the most common method is called Ground Penetrating Radar (GPR). Initially developed to locate mines, this technology is used now also to find avalanche victims, microfissures in constructions, and small archaeological objects. The GPR got its first big break in 1994, when it was successfully used to locate the victims of serial killers Fred and Rose West. 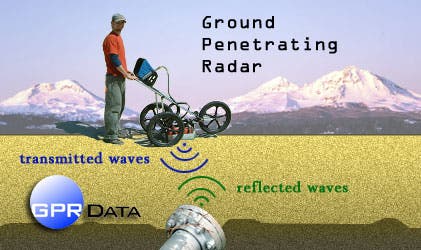 GPR works by sending EM waves to the ground and timing how much it takes them to return. The travel time is dependant on the material through which it passes, so for example if you have a body buried somewhere, the radar will understand that the travel time for the body is different than that of the ground, and thus figure out that there is something different in there. Of course, this means that the GPR also has its limitations; first of all, it can only figure out contrasts, so if what is buried is pretty similar to the surrounding environment, the odds of finding it are minimum.

‘If you’re looking for a gun in a metal scrap yard, you’re not going to find it,’ comments Pringle. 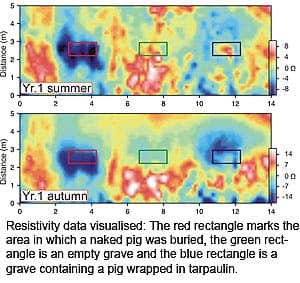 The GPR machine is very sensitive, and the rates of success also depend on several other factors, such as soil type, how long it has been buried, and whether the body is clothed or not – a “dressed” pig is easier to find than a naked pig. Also, rough terrain is a disadvantage. This, and the fact that it is quite expensive, contribute to the GPR being relatively uncommon for the police.

Luckily, geophysicists are an inventive and smart bunch, so they use it combined with another methods, most commonly with electricity: they test the electrical resistivity, the soil’s ability to resist a passing electrical current.

‘As you decompose, your tissue and blood will mix with the soil water and give a very conductive leachate,’ explains Pringle. As a result, an electric current will flow more easily through a patch of ground where a body is buried, allowing geophysicists to spot potential graves.