by Tibi Puiu
in Research, Technology
A A

For most, a jetpack can be considered more of a SciFi concept than a viable, realistic flying contraction. However, recent advances from a New Zealand aeronautical company might have paved the way for jetpacks to finally become commercially mainstream. Exiting, right?

Just recently this month, the aforementioned company, Martin Aircraft Co.,  has successfully tested one of its jetpack model to a whooping altitude of  5,000 feet above Canterbury, New Zealand. The previous altitude record for the fan-driven, wearable aircraft was 50 feet (15 meters), meaning this model has successfully risen to an altitude 100 times higher than any previous attempt.

“This successful test brings the future another step closer,” Glenn Martin, the jetpack’s inventor and founder of the New Zealand-based Martin Aircraft Co., said in a statement.

How safe are jetpacks though? Well, one can imagine that this is its biggest drawback – at one mill high up in the sky, if the engine fails, you’re pretty much done for. As such, the company has installed a safety system which works around the ballistic parachute principle. A ballistic parachute is just like a normal parachute except that it uses a small explosive charge to deploy itself really, really fast. It works safely even if the engine fails at a close altitude too, thanks to its very small response time.

The jetpack pushed the envelope for climb rate  too, as the SciFi dream come true pushed 800 feet per minute or 4 meters per second, with the capability to rise even faster; as well as flight duration (9 minutes and 46 seconds).

“This test also validated our flight model, proved thrust to weight ratio and proved our ability to fly a jetpack as an unmanned aerial vehicle, which will be key to some of the jetpack’s future emergency/search and rescue and military applications,” Glenn Martin said.

Below you can watch a short video of the successful Martin Co. jetpack test run, in which they strapped a dummy inside the jetpack, the latter was controlled via a wireless remote from a neighboring helicopter. 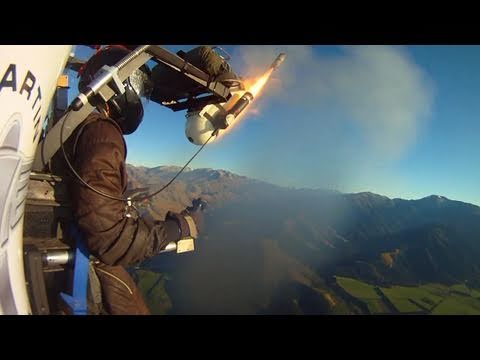 If you’re willing to put down the $100,000 asking price, later this year you might be seen souring away through your neighborhood, when the jetpack will become commercially available.