Are jetpacks finally taking off into the mainstream?

A Shenzhen startup has received 200 orders for the Martin Jetpack, what they call "the world's first practical and commercial jetpack".

For decades, companies have funneled millions to make a viable, working jetpack. It was only in the last couple of years that the engineering and economic challenges were met, with more than a dozen companies around the world designing jetpacks. The market has also caught on, it seems. China Daily reports a Shenzhen startup has received 200 orders for the Martin Jetpack, what they call “the world’s first practical and commercial jetpack”.

“Our buyers are from all over the world,” said Zhang Yangyang, CEO of KuangChi Science Ltd,. “For example, a rescue team in Dubai ordered about 30 units because the jetpack is easier to operate than helicopters in a city full of skyscrapers.”

A jetpack is a propulsion device worn on the back of a single user which uses a jet of gas to create lift. Engineers have designed jetpacks that work on anything from the oxygen-methane-mix you often see in rockets, to high-power compressed nitrogen.

The First Responder Jetpack made by the Chinese startup is powered by a gasoline engine which drives twin ducted fans.  It was built for saving people from fires, as well as for search-and-rescue operations, border security, disaster recovery and so on. It can carry a payload of up to 120 kilograms and has a flying autonomy of 45 minutes at 80 km/hour. That’s considerably more autonomy than its competitors. The  JB-9 from JetPack Aviation, which can reach heights of up to 10,000 feet, can only fly for 10 minutes. 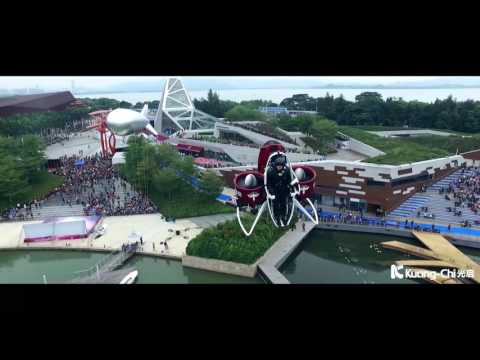 Indeed, a jetpack might prove more useful in some skyscraper-rich urban environments like Dubai than a helicopter would. They’re also great for sports, as Yves Rossy and Vince Reffet marvelously showed when they zipped through Dubai’s glorious skyline with jetpacks that can fly at 300 km/h.

Safety should come first, though. Last month, the vice president of  Jet Pack International was severely injured during a test of one of the company’s jetpacks.