A talented team of students from the University of Maryland’s Clark School of Engineering has set a new record for the longest flight time for a human-powered helicopter. The helicopter in question, called “Gamera II”, after the flying monster turtle of Japanese films and the university’s terrapin mascot, was devised and built by the students themselves. 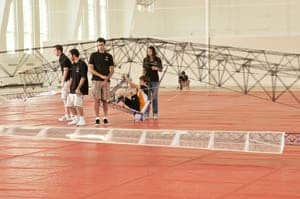 First thing that came into mind when I first read about the young engineers’ accomplishment was Leonardo da Vinci’s famous aerial screw concept. In his late fifteenth century notes, one of the most important figures of the Renascence sketched a remarkable design in which  a flying machine resembling a helical screw would be able to lift in the air, powered by man’s mechanical efforts. “If this instrument made with a screw be well made – that is to say, made of linen of which the pores are stopped up with starch and be turned swiftly, the said screw will make its spiral in the air and it will rise high.”

Like many of his invention’s, though, da Vinci’s aerial screw never left the drawing board, but it served as a fascinating piece of science, and dared many to fantasize and dream – the first actual helicopter wasn’t built until the 1940s.

The Gamera II  is built of lightweight carbon fiber rods, with strength lent from the team’s own “micro truss” system of design, which allowed the human powered helicopter to weigh only 75 pounds, unmanned. Kyle Gluesenkamp, a 135-pound Ph.D. candidate in the mechanical engineering department, powered the craft with both foot pedals and a hand crank last week which allowed it to lift for 50 seconds of flight. on record of approximately 35 seconds. If verified by the National Aeronautic Association, this new time will supersede the team’s previous world record of 11.4 seconds set last July. The Gamera II, which uses about $150,000 worth of materials, has four 43-foot rotors that rotate at about 20 revolutions per minute.

The team is pursuing the $250,000 prize offered by the American Helicopter Society, through its Sikorsky Human-Powered Helicopter Competition, in which a human-powered helicopter needs to fly at least three meters above the ground for at least 60 seconds, all while remaining withing a 10 by 10 square, in order to win. The competition has been open for 30-years, but in all this time no one team was able to meet the winning conditions. Inderjit Chopra, the professor advising the project, said that Gamera II reached an estimated altitude of 4 feet – nearly half the required altitude to meet the contest’s terms.

Next, the team hopes to reach a flight duration of 60 seconds, which should bring it one step towards completing the AHS Sikorsky Prize goals.