by Mihai Andrei
in Inventions
Reading Time: 3 mins read
A A
Share on FacebookShare on TwitterSubmit to Reddit

Prosthetics have been around for a very long time – the first mention of such a device is by the warrior queen Vishpala in the Rigveda, which was written roughtly some 3.500 years ago. But even with the spectacular developments of the past century, only in the past couple of decades did prosthetics really start developing at an entirely new level.

For 32-year-old Zac Vawter this is really great news; he lost his lower right leg in a motorcycle accident, but he’s got all the reasons to be happy: doctors fitted him with an artificial limb that uses neurosignals from his upper leg muscles to control the prosthetic knee and ankle. Basically, he was given a thought-controlled prosthetic leg which works just fine, as reported by scientists at the Rehabilitation Institute of Chicago.

“This is a groundbreaking development,” says lead author Levi Hargrove, a biomedical engineer and research scientist at RIC. “It allows people to seamlessly transition between walking along level ground and going up and down stairs and slopes.”

The technology is not really new, as it has been used for thought-controlled bionic arms several times, but it’s the first time a leg was developed using it. When the patient wants to move his leg, his brain emits an electric signal which travels through his spinal cord and the nerves in his upper leg, until it is picked up by electrodes in the bionic leg. Then, the electrodes pick up the signal from the hamstring muscles, where the nerves that had run through Vawter’s lower leg were redirected during the amputation. So when he is thinking about walking or just moving his ankle, his hamstring muscles contract, just like they would do during walking.

The prosthesis allows a normal, smooth gait regarldless of the incline.

“It makes a phenomenal difference,” says Vawter, a software engineer from Yelm, Wash., whose right leg was amputated through the knee in 2009 after he crashed his motorcycle. Aware of the institute’s work on bionic arms, Vawter and his surgeon contacted Hargrove and the team developing the pioneering prosthesis. For nearly three years ending in October, 2012, Vawter would travel to the institute periodically. 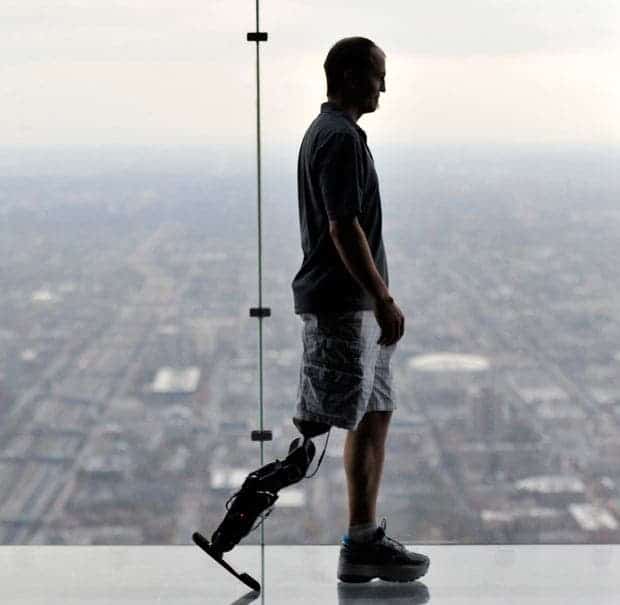 Although the first experiments didn’t go out just smoothly, after several software and mechanical revisions, Vawter can now walk just like he did before the accident – even up and down the stairs.

“My sound leg goes up every step first, and I’m just dragging the prosthetic leg along behind me.” But with the bionic leg, “I go leg over leg,” he says. “The bionic leg listens to the various signals from my nerves and responds in a much more natural way.”

This is just a prototype and it’s unclear just how much it would cost, though estimates range anywhere between $20.000 and $120.000. However, careful and efficient engineering can make it even more affordable.