by Mihai Andrei
in Physics, Research
Reading Time: 3 mins read
A A
Share on FacebookShare on TwitterSubmit to Reddit

Stephen Hawking may have just won the most outrageous bet in physics history, a few years ago, when he claimed that the LHC, along with every other particle accelerator won’t find the Higgs boson, the elusive ‘God particle‘, simply because it does not exist. 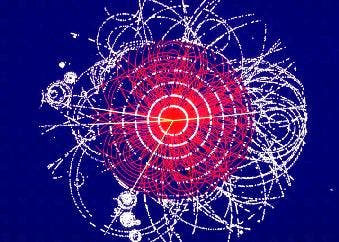 When he addressed this bet, Peter Higgs, who proposed and supported the existance of this boson took it rather personally, stating that to answer Hawking’s challenge would have been “like criticizing the late Princess Diana”. As a matter of fact, the great majority of the physics community adopted the idea that the Higgs boson exists, and all that is needed in order to find it is run the LHC long enough; so far, this hasn’t been the case. In the other corner, Hawking, who is known for controversial and contrarian pronouncements was simply believed to throw around his weight.

But time passed, the LHC was up and running, and the God particle was still not showing up. Running continually at an unprecedented energy level of seven trillion electron volts for five months, the LHC has been gathering petabytes of data that are being analyzed by a grid of interlinked computers worldwide in search of the missing boson; and yet, at the Biennial International Symposium on Lepton-Photon Interactions at the Tata Institute of Fundamental Research in Mumbai, India, physcists dropped the bomb: over the entire energy range that the collider explored, from 145 to 466 billion electron volts, the Higgs boson is excluded with a 95% probability.

The search for the Higgs boson can be looked at as a statistical challege, in which you have to analyze particles that emanate from high energy collisions and measure their energies, mass, direction of flight and other parameters, in order to see what kind of particles they are. These measurements carry a probability, such as 95%, or 99%, or the infamous “five-sigma” requirement for certainty: 99.99997%.

In order to be more specific, this only states that is’s very unlikely for the particle to exist in the investigated area of 114 to 145, which is commonly believed to be the area we should search in. Lower energies could be hiding the boson, but smaller particle accelerators, to which lower energies are available haven’t been able to find it either; maybe, indeed, there is nothing to find – or maybe we just have to be more patient and look harder.

UPDATE: hurah, hurah. wouldn’t you know it – the Higgs boson does exist and it’s well ‘kicking’! This is a really old post, however it’s well worth updating. Not to nudge Hawking or anything, but… CERN researchers found and confirmed with subsequent measurements that the Higgs boson – the God particle responsible for granting matter with mass – does indeed exist.