People find out that CERN trapped antimatter for over 15 minutes

It always baffles me to see how science news propagate; it seems whenever a study or a report is published, there are two waves of acknowledgement: the first one, science sites and magazines write about it, and the second one, the supermassive one, where the media picks it up. This is exactly the case here.

[Warning: there may be a little ranting in this part, so if you’re not interested in it, just jump to the next subtitle]

CERN announced that they held antimatter for approximately 1000 seconds over a month a go – I wrote about the antimatter trap here. Of course, I wasn’t the only one to do it – respectable sites, especially those who take the news directly from the source were all over it. But it wasn’t until yesterday that the study was picked up by major news agencies, which lead to the whole internet writing about how antihydrogen was trapped and all that. It saddens me to see even some of the big sites and magazines (be they science or popular science) have fallen into the trap of the easier path and pick up news from agencies instead of the real source, in this case, CERN.

The reason why it got picked up yesterday is that it was only then that the full study was officially published in Nature Physics (the study is free by the way, so you should really look at it if you are interested). So it would make perfect sense to go into additional details, at a higher scientific and even technical level, given the fact that you have a full study and not a report published by CERN. But this is not what happened – as you have probably noticed, if you are interested in science, the internet is full of general articles about antimatter, how it was trapped for the first time for such a long period, giving the impression that this happened just now. 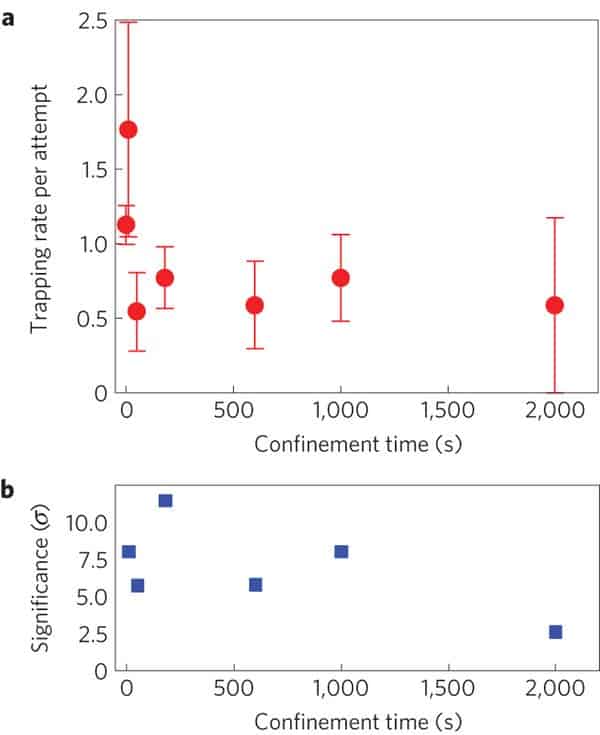 Antimatter raises probably the biggest unanswered questions in the world of physics; it is believed that in the first moments of the universe, both matter and antimatter existed in a brotherly fashion. Well, brotherly isn’t the word here, since they annihilate each other whenever they meet, but they existed in equal or at least comparable amounts. But look around you; there’s all this matter you see, and absolutely no antimatter, so where did it go ? This is the major question scientists are trying to answer, and of course, if you want to study something, you first have to ‘see’ it – in one way or another.

But capturing antimatter is extremely hard; up until this development, the record for capturing antimatter was only a few fractions of a second, so it’s easy to understand why 1000 seconds of antimatter is not something big – but something huge. Actually, on April 26, CERN announced that when fully operational, their facilities are capable of producing 10^7 antiprotons per minute. Thay may seem like an enormous amount, but it’s not; operating at this speed, it would take them 100 billion years to produce one gram of antiprotons. The costs are also huge: according to CERN, it cost over a few hundred million Swiss francs to produce about 1 billionth of a gram; in case you’re wondering a Swiss franc is more than one dollar.

Still, having antimatter at your disposal, even at these amazing efforts is worth it; in several minutes, you can study its properties, especially something called the charge-parity-time reversal (CPT) symmetry. In layman terms, what CPT says is that if you have a particle moving in one direction, and an antiparticle moving in the opposite direction in a mirror universe, they would be indistinguishable. So basically matter and antimatter have the same spectral profile. This is the reason why researchers have speculated that since our universe prefers matter over antimatter, it also prefers time moving forward and not backward.