Antimatter trapped for 15 minutes at CERN

by Mihai Andrei
in Physics, Research
Reading Time: 3 mins read
A A
Share on FacebookShare on TwitterSubmit to Reddit

The team operating the Antihydrogen Laser Physics Apparatus (ALPHA) at the CERN laboratory in Geneva, Switzerland reported storing antimatter for approximately 1000 seconds, which might not seem like much of a big deal, but it is about 10.000 times longer than the previous record !

A cloud of antihydrogen 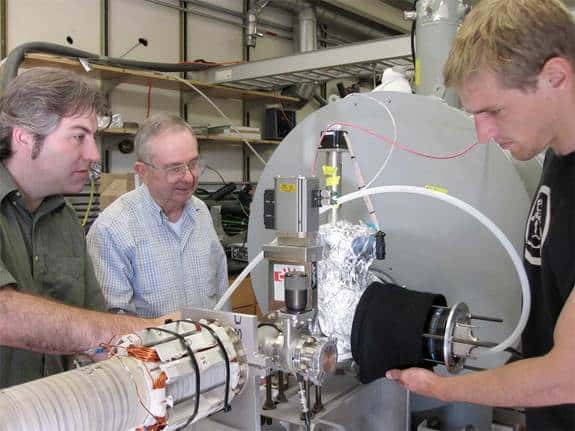 This study will hopefully reveal more about the elusive antimatter, and whether this is in fact the true mirror image of matter. With this thought in mind, the ALPHA team set out to find a way to capture antimatter for as long as possible; they devised an antimagnetic trap to help them capture a cloud of antihydrogen. The thing about antimatter is that it creates a bang whenever it comes in contact with matter, thus making it almost impossible to store for a long time.

In previous experiments, researchers would open the trap and observe the collisions between antimatter and the trace gases; the collisions either annihilated the antimatter or gave it enough energy to escape the trap. But this time, the people at CERN did things a little differently.

They waited much longer before opening the trap, and they cooled the antiprotons, which lowered the energy of antimatter, allowed more to be captured, thus raising the chance that some of it will be captured for a longer period of time.

Capturing antimatter for a longer time will allow further experiments to be conducted on it, such as checking if the energy levels of the antihydrogen and hydrogen are the same.

When introduced, antimatter was a revolutionary concept, and rejected by many physicists at the moment. In recent years, it has been shown that with the right process, it can be captured for a limited amount of time, which was generally restricted to a fraction of a second. CERN particle physicists shattered that ‘record’, capturing it for a much longer period, almost enough to perform some experiments on it.

It is theoretized that when the Universe was formed, matter and antimatter were created in equal amounts, but the question remains: where is all the antimatter ? We are all made out of matter (you, me, trees, planets, etc), but it is almost impossible to even get a glimpse of antimatter. This is why researchers hope to capture it for longer periods of time, thus allowing the possibility of experiments which would shed some light on some of the most important questions in physics at the moment.