by Tibi Puiu
in Physics, Research 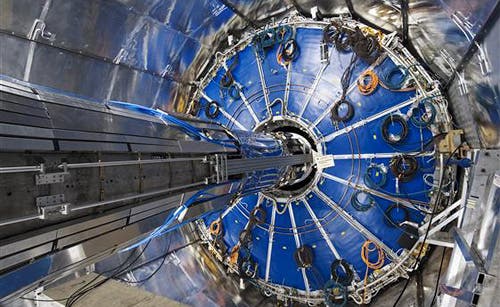 The idea which states that nothing can travel faster than light is a corner stone of modern day physics, upon which scientists have built up models and theories of how the world, the Universe, works. If the statement is proven to be false, than our understanding of physics becomes undermined, and as such needs to be revised, with numerous implications. This is why the CERN experiment, which shockingly announced neutrinos could travel 60 nanoseconds faster than light, needs to be held under the utmost scrutiny. Now, another CERN announcement reports that another CERN experiment, conducted by a different team of researchers, and which used an improved version of the experimental set-up, came up with absolutely the same results.

Rightfully so, the scientific community was in awe when news of the neutrino announcement broke. Surely enough, numerous comments and theories followed that explained why the experiment was flawed, and susceptible to errors. In an experiment of this magnitude, absolutely nothing is negligible. Up until now, the number one culprit responsible for an eventual error in measurements concerned the shooting of long bunched neutrinos.

In the initial experiment, comprised of 16,000 separate measurements spread out over three years, launched long bunches of neutrinos, which lasted 10 millionths of a second. The experiment carried out by the Opera collaboration, short for Oscillation Project with Emulsion-tRacking Apparatus, addressed a different way through which the proton beams were produced, resulting in bunches just three billionths of a second long.

“A measurement so delicate and carrying a profound implication on physics requires an extraordinary level of scrutiny,” said Fernando Ferroni, president of Italian Institute for Nuclear Physics in a statement.

“The experiment Opera, thanks to a specially adapted Cern beam, has made an important test of consistency of its result. The positive outcome of the test makes us more confident in the result, although a final word can only be said by analogous measurements performed elsewhere in the world.”

As such, the bunch of neutrinos, created at the CERN facility, were yet again launched through the 730km circut to the giant detector at the Gran Sasso laboratory in Italy. Around 20 neutrino events have been measured at the Gran Sasso lab in the fine-tuned version of the experiment in the past few weeks, for each the scientists concluded from the new measurements that the neutrinos still appeared to be arriving earlier than they should.

“With the new type of beam produced by Cern’s accelerators we’ve been able to to measure with accuracy the time of flight of neutrinos one by one,” said Dario Autiero of the French National Centre for Scientific Research (CNRS). “The 20 neutrinos we recorded provide comparable accuracy to the 15,000 on which our original measurement was based. In addition their analysis is simpler and less dependent on the measurement of the time structure of the proton pulses and its relation to the neutrinos’ production mechanism.”

The CERN experiment is far from hitting the all clear zone, however. Further scrutiny by other independent parties are required, although there a just a few facilities in the rest of the world which have detectors capable of catching neutrinos – one is Fermilab, which is already at work replicating the CERN experiment. Data collection and further replication of the experiment will constantly be underway through the year at CERN. And of course, there are other error inflicting theories which have yet to be addressed.

The Opera measurements were reported in the the ArXiv preprint server on Friday morning and submitted for peer review in the Journal of High Energy Physics. Next year, teams working on two other experiments at Gran Sasso experiments – Borexino and Icarus – will begin independent cross-checks of Opera’s results. The US Minos experiment and Japan’s T2K experiment will also test the observations. Expect this to last for a while.