Health habits influence how much we shrink with age

by Tibi Puiu
in Health & Medicine, Research
Reading Time: 3 mins read
A A
Share on FacebookShare on TwitterSubmit to Reddit 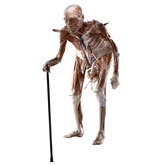 A new survey conducted by researchers at University of Southern University, Harvard University and Peking University have found that lifestyle choices during adulthood influence how much we will shrink in height as we age. Other studies had analyzed how health and height are linked both in childhood and adulthood, however the present study is the first to examine height loss as we age.

“Had we only examined the correlations between measured height and health, we would have missed this important insight,” said John Strauss, professor of economics at the USC Dornsife College of Letters, Arts and Sciences and an investigator on a study published in the April issue of the American Economic Journal: Applied Economics. “The evidence shows that it is not only early-life events that are associated with how we age, but health decisions in later life as well.”

Typically humans grow in height up until they turn 21 years in age, while some might grow or stop growing, respectively, up to a few years after or before this threshold. It’s rather well known and frustrating, however, that typically after 40 years of age, humans shrink in height. On average, we shrink about a quarter to a third of an inch per decade for every decade after 40. All told, men will get about 1.2 to 1.5 inches shorter, and women will lose up to 2 inches, by age 70.

This is due to a number of factors. As we age, the discs between our vertebrates lose fluid, so they flatten just a tad, but in the process come close together. What happens is your spine is actually shrinking a bit, following a decrease in overall height. It’s important to note that the limbs never shrink. Loss of muscle mass with age also leads to a poorer posture, which also adds weight to the impression of shrinkage.

The present study used data gathered from a longitudinal  survey of 17,708 adults beginning at age 45, from June 2011 to March 2012, which includes both subjective self-reported responses to survey questions, as well as objective physical measurements such as blood tests. The survey covers 150 counties randomly chosen throughout China.

One of the researchers’ findings was  an especially strong relationship between height loss and cognitive health. For instance, it was found that individuals who had lost more height than usual were also more likely to perform poorly on standard tests of cognitive health, such as short-term memory, ability to perform basic arithmetic and awareness of the date.  In addition, having completed primary school, rather than being illiterate, is associated with 0.9 cm less height shrinkage in men — a large difference when considering that overall average height loss for men is 3.3 cm. Completing high school meant an additional 1 cm less in shrinkage.

For women, having completed primary school was the difference in 0.6 cm of shrinkage, compared to average overall height decrease of 3.8 cm.