Thousands of methane-filled bubbles are waiting to explode in Siberia

Some of the craters are 50 meters deep.

Some 7,000 explosive methane bubbles have crept up in Siberia’s Yamal and Gydan peninsulas as a result of the region’s first thaw in more than 11,000 years. Some have caught fire leaving behind huge craters. Nobody has been injured yet, but given the sheer number of these bulging gas pockets, that may just be a matter of time, unfortunately.

One of the last tundra eruptions to cause major damage occurred last month near a reindeer encampment, on an Arctic riverbank. The explosion caused a deafening bang, ‘shooting fire into the sky’ that raged on for minutes. A 50-meter deep crater formed and immediately filled with water, the Siberian Times reports. Luckily, the reindeer quickly fled the site of the methane discharge in the Yamal Peninsula, which is known to locals as ‘the end of the world’. Not coincidentally, Yamal has the biggest concentration of natural gas fields on the planet.

“The reindeer fled to the south, but he had newborn calf (in his hands),” Mikhail Okotetto, a raindeer herder, told a local TV station. “So the reindeer and dogs, all ran away, and he was just left there standing with the newborn calf.”

Similar events are just waiting to happen, judging by the numerous patches of swelling grass like the one demonstrated by the daredevil below. 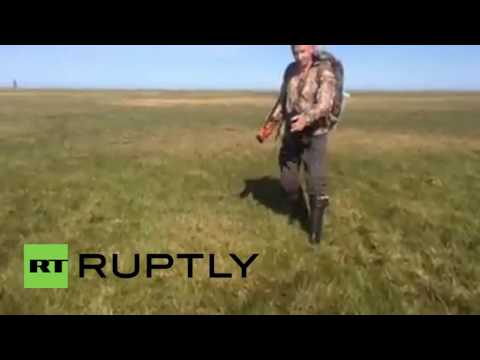 Professor Vasily Bogoyavlensky, an expert in thermokarst lakes, says these formations have started popping up at an alarming rate around Arctic Russia starting in 2014. These are reportedly produced by methane creeping through the Siberian permafrost freed by rising temperatures as a result of global warming. It might only get worse as the methane, a gas more than 25 times more potent than CO2 in trapping heat in the atmosphere, is released in ever increasing quantities into the atmosphere. What’s more, according to a new study, global warming will defrost much more permafrost than we thought.

According to Professor Vasily Bogoyavlensky, the deputy director of the Moscow-based Oil and Gas Research Institute, part of the Russian Academy of Sciences, there are a number of features that make the methane bubbles — also called thermokarst lakes — stand out. For instance, this includes a distinctive blue hue caused by algae which are attracted to the sulfur in the seeping greenhouse gas. Other common features include traces of gas in the winter ice cover, active erosion on the shores, and permafrost swelling at the water’s edge.

Like many other places around the globe, Siberia has been exceptionally hot in the last few years. In March, parts of Siberia and the Arctic were as warm as 12.1°C (22°F) above the 1951–1980 average.

It’s not just Siberia that should worry. Similar permafrost deposits, that still keep methane locked in Canada or Alaska, could thaw and produce similar features there as well.

The only solution to this mounting problem that threatens wildlife, people’s livelihoods, and adds to global warming is to urgently reduce fossil fuel use. It’s estimated 800,000 square miles of permafrost could be saved if the Paris Agreement goals are met, namely to limit warming to no more than 1.5°C compared to Industrial Age levels. The Paris Agreement, which President Donald Trump wants to withdraw the USA from, is a pact signed by more than 190 countries.