This is only the beginning.

by Elena Motivans
in Climate, Geology, News
A A

Researchers found something really strange in Northern Siberia last year. The ground rose up to form large bubbles. They have been called the “trembling tundra” because they jiggle when stepped upon. It turns out that these bubbles have formed because methane gasses are rising into the empty spaces created by melting permafrost. Like a ticking time bomb, the pressure is building up inside these bubbles and the gas could be released. And the bursting of these bubbles will release even more gas into the atmosphere, initiating a vicious feedback loop. 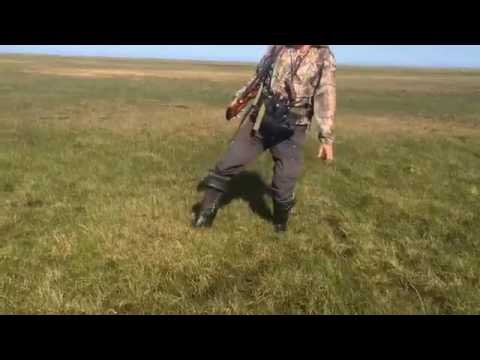 A researcher showing what these methane bubbles look like. Video credits: Siberian Times

Last year, 15 of these methane bubbles were found on Bely Island. An investigation by plane in the region found that the whole region is teeming with them. There are about 7,000 of them!

Local environmental researchers Alexander Sokolov and Dorothee Ehrich delved into the heart of one of the bubbles. They pulled back the dirt and grass on the surface and what they found confirmed our fears. The air coming out contained up to 1,000 times more methane than the surrounding air! And it contained 25 times more carbon dioxide.

In 2014, a large mysterious crater (30 meters wide and about 70 m deep, 98 feet wide and 230 feet deep) appeared suddenly in the Yamal peninsula, Siberia. The air at the bottom of the sinkhole contained up to 9.6% of methane. The normal amount for that area is 0.000179%, so it’s a huge difference. Although a falling meteorite or missile explosion were among the first hypotheses, one hypothesis is that it exploded because of methane gas building up below it. However, no one has seen one of the gas bubbles explode so we should exercise caution in linking the craters and the methane bubbles. The craters have only been found recently, but that does not necessitate that they weren’t there before.

In Siberia, there is (or was) a thick layer of ice that traps methane. Methane is stable when frozen at low temperatures, but as the permafrost melts, it creates room for methane. The methane comes from an ancient shallow gas reserve 500 to 1,200 metres (1,640 to 3,937 feet) below the surface. The gas rises from cracks in the clay and exerts pressure on the surface. The recently hot summers in Siberia are melting the permafrost that kept the methane in place. Some parts of Siberia, albeit the more Southern region, experienced temperatures of 35°C (95°F) last June. Teams of researchers are currently studying these the methane bubbles to see exactly how they relate to climate change.

All this methane being released is bad news because methane is a 30 times more potent heat trapper than carbon dioxide. For each degree that the air temperature rises, the amount of methane released from permafrost and wetlands will increase multifold. The methane bubbles in the tundra seem to show that this is happening already. The increased gas content will increase the air temperature, causing even more methane to be released. It is a vicious cycle— and one that has already started.