by Tibi Puiu
in Health & Medicine, Mind & Brain, Research
Reading Time: 3 mins read
A A
Share on FacebookShare on TwitterSubmit to Reddit

Children are veritable knowledge sponges that can appropriate an intense amount of skills in a short amount of time. As we age, starting from the end of puberty, people seem to loose their ability of learning new skills as intense as children do. For instance, if a 30 year old French man decided to starting learning English, even if he were to study, work and live in London, for decades maybe, chances are he wouldn’t be able to lose his French accent. 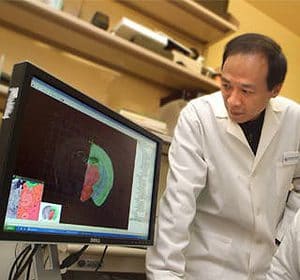 Researchers believe this steady decline in the ability of learning and making new memories is caused not by a decrease in our capacity of absorbing new information, but rather by a hindering in the human’s brain capacity of filtering and eliminating old information like before.

“When you are young, your brain is able to strengthen certain connections and weaken certain connections to make new memories,” said Dr. Joe Z. Tsien, neuroscientist at the Medical College of Georgia at Georgia Regents University and Co-Director of the GRU Brain & Behavior Discovery Institute.

For older brains, this ability is diminished. The Georgia Regents University researchers refer to the NMDA receptor in the brain’s hippocampus – a major component of the brain primarily responsible for transferring information from short-term to long-term, basically facilitating memory) – which acts as a switch for regulating learning and memory, working through subunits called NR2A and NR2B.

When NR2B is over-expressed with respect to NR2A – such as the case with children – neurons communicate between themselves a bit longer than those in adult brains, where the opposite case is in place (more NR2B than NR2A). This leads to stronger bonds between neurons – synapses – and a better ability to learn.

“What is abnormal is the ability to weaken existing connectivity,” Tsien.

The scientists tested this theory and engineered mice with more NR2A, less NR2B – mimicking the adult human brain ratio – and found the rodents were still good at making strong connections and short-term memories but had an impaired ability to weaken existing connections. This weakened the ability of making new long-term memories as a result, too. The whole process is called information sculpting by the scientists. “If you only make synapses stronger and never get rid of the noise or less useful information then it’s a problem,” said Tsien, the study’s corresponding author.

The researchers weren’t surprised to find that hampering of the ability to weaken existing connectivity is a more important factor leading to poorer learning and memory-making ability than previously thought. Tsien and colleagues had known for a while what an overexpressed NR2B might entail. In 2009 the scientists announced they had engineered a smarter than average rat called Hobbie-J, while a decade earlier Tsien reported in the journal Nature the development of a smart mouse dubbed Doogie using the same techniques to over-express the NR2B gene in the hippocampus.

The study findings were reported in the journal Scientific Reports.